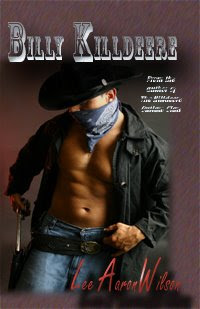 This week on the RRT blog we will be having an interview with Lee Aaron Wilson. To get you started, I'm posting an excert from his book BILLY KILLDEERE which is available for purchase at Treble Heart Books. You can purchase BILLY KILLDEERE by clicking here.

Out in the yard, the drivers started yelling their teams into motion. Not long now. "Jade, stand with your back to the door, facing me."
My coat covered one gun, I held the other. Footsteps. The door started to open and Carter Desledge said, "My turn yet? What…?"
He looked at Rachel, clothed and conscious. His expression said he'd expected her to be stripped and prone. Jade had lied. He dropped. Desledge drew and fired. Afraid he'd try for Rachel, I shot too quick. I saw the tug at the side of his vest.
Desledge yelped, backed out, and jerked the door shut. I shot through it, twice. We heard the sound of pounding feet on the board porch. He was in the saddle and headed out the gate when I stuck my head outside. I turned back quickly. Jade lunged to his feet and grabbed for the girl, and got claws in his face for his trouble.
Before he could get control, I laid a gun barrel on the back of his head. That took him out of action again. Rachel pounded him about the face a few more times, for good measure. She was mad clear through.
"He was going to assault me. And they were going to kill me." She stopped. "What can you do?"
"We'll play it by the book." I told her. "I don't look like they expect Billy Killdeere to look, and generally don't act like they expect him to act. We'll go to the law."
"I guess that's the right thing to do." Rachel, still scowling, said, "but I'd rather you just shot them all."
Inside, I couldn't argue with her, but this was the new me. I had to go by the book.
The freight wagons had cleared the yard. The man who'd been unconscious in the driveway was sitting up, but hurting. Several men came to the door. Olaf came on in. He looked angry when he entered. He saw Carl lying there bloody and unconscious. "What we do, Boss?"
"Get a spring wagon and throw a mattress in it. Carl Bartlett was shot, and that man has a head injury. Tie up this S.O.B., real good. I'm taking all three in the wagon. The injured two to the doctor, Jade I'll turn over to the sheriff. We'll see what he can do."
"What else?" The mill hands crowding the door were angry. This was their mill and they'd been robbed. "We gotta do something!"
"You post guards, so it can't happen again. You all tell the sheriff exactly what you heard and saw."
Their faces were angry. "That's all? We aren't going after them?"
One of the guns I'd taken from Jade was still in my belt. I stuck the second in beside it and dropped my hands to my sides. "What do you want to do? Hang Jade? Go outside the law? You all know I've got another name and I can use a gun. Do you know there's five thousand dollars on my head, dead or alive? Do any of you want that? I love Jenny, but I can't ask her to marry me. Do you want that kind of thing on your shoulders?"
Olaf stared at me for a whole minute, then turned to the hand nearest him. "You heard the boss, get a wagon. Fred," he pointed at another man, "you were a sailor. Practice your knots on that man the boss and Miss Rachel took. Move. Scotty, help Thompson, he's hurting."
at September 03, 2008