A Perfect 10: SHADES OF DARK by Linnea Sinclair 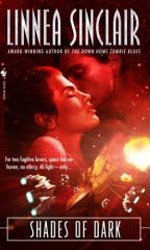 Fugitives in space! That is what has become of Chasidah "Chaz"' Bergren, a former captain of the Sixth Fleet along with outlaw Gabriel Ross "Sully" Sullivan and their ragtag intergalactic crew. Chaz and Sully are lovers on the run from Hayden Burke, who happens to be Sully's cousin, and Darius Tage. These two have secretly re-created mutant beasts called Jukors that were originally used by the Empire and are now considered to be too dangerous, even in battle. Chaz and Sully are searching for Burke's illegal lab where these beasts are being created. If they aren't able to stop Burke, he could take over the entire galaxy.

If things aren't bad enough, Sully himself places everyone in danger because of what he is. Sully is a rare human breed called a Kyi-Ragkiril who has secret telepathic and telekinetic abilities. His kind are so feared that, if found out, he would be killed. Chaz is able to keep Sully under control as his ky'sara, where he can sense all her thoughts and emotions just as she can do the same to him. They have only been lovers and mates for three months, but their attraction for each other has been there for years. Sully saved Chaz from a place where only death would be a welcome relief, and now they are closer than any humans can be.

Even though time may be running out for this motley crew, Chaz does have some support on her side with her brother Thad and her ex-husband, Philip Guthrie, who is an Admiral of the Sixth Fleet. Things go from bad to worse when Thad is arrested for treason because he aided the fugitives. Unless Thad tells everything he knows, he will be executed.

The race is on for both Chaz and Sully, along with the help of Ren, who is good friends with the couple and is a blind Stolorth empath. They must find any information they can about these labs, even looking for help from those who shouldn't be trusted. There is one man who may be the answer to their problems. Regarth Serian Cordell Delkavra, otherwise known as Captain "Del" Regarth, is also a Stolorth and a Kyi. He is willing to help for a price, and that is training Sully to become more powerful and in control of his Kyi capabilities.

As Sully and Del bond in ways that makes Chaz very uncomfortable, Sully is slowing changing into something that scares Chaz. She doesn't trust Del because Del wants to share Chaz with Sully! But Chaz has to put her trust in Del's hands because he is possibly the only one who can help save the universe as they know it. It all comes down to the price Chaz is wiling to pay to keep her lover sane and hope their love is strong enough to keep them alive.

Buckle yourselves in and prepare for a ride you will not soon forget! Linnea Sinclair has written a masterpiece of science fiction fantasy with SHADES OF DARK. This is the sequel to her award winning GABRIEL'S GHOST that turned me into a sci-fi fanatic, and don't be surprised if you find yourself doing the same. SHADES OF DARK takes place three months after GABRIEL'S GHOST and reveals how Chaz and Sully are surviving and if their love is still stronger than ever. And I can tell you that the love and devotion between these two is so strong, that if one died, the other one would be lost as if a piece of their soul was gone.

The love story between Chaz and Sully is more out in the open and just as important as the action and suspense as they try to save the known galaxy. There are excellent fight scenes and some nice funny moments to relieve the non-stop tension. You will find yourself welcoming old friends, such as Ren, an alien being with a scary reputation who is so kind, sweet and very intuitive, along with Philip, Chaz's ex-husband, who in GABRIEL'S GHOST was a roadblock to Chaz and Sully's newly formed relationship. Philip is a very worthy hero, and I anxiously await his personal story to be told in HOPE'S FOLLY, due to be published sometime in spring 2009.

I also enjoyed the shady Del who is one of the most interesting characters in this book. He straddles the fence between good and evil and is a worthy adversary for Chaz. You will have no clue what he has up his sleeve till the very end, and that may surprise you in ways I didn't even see coming. Even when he was propositioning Chaz, I still found him to be a bit irresistible.

SHADES OF DARK is not to be missed. Of course, I recommend you read GABRIEL'S GHOST first to get a good idea of the story and the characters. If you don't find yourself having a crush on Sully, well that is fine, because I want to claim him for myself! *G*.

Linnea Sinclair is always an author you can count on for amazing stories and is one of the best in the business. SHADES OF DARK is going down as one of my favorite books of all time and well deserves RRT'S Perfect 10 award for excellence!

Thanks for the terrific review of Linnea's SHADES OF DARK. I have admired her writing for years, and it only gets better.