A Perfect 10: PLEASURING THE PIRATE by Emily Bryan 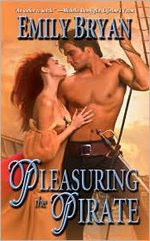 Jacquelyn Wren is the bastard daughter of a much sought after courtesan and is chatelaine of Dragon Caern Castle. When she hears that Gabriel Drake is returning to Dragon Caern, she plots to kill him on his journey home. Jacquelyn has heard rumors of Gabriel’s ruthlessness and is determined to protect the inhabitants of Dragon Caern from the surely abusive wrath of the pirate, Drake the Dragon.

Gabriel, who has been thought to be dead by his family, has given up life as Drake the Dragon. He recently received a pardon from King George I for his bravery and looks forward to returning home to Dragon Caern Castle to relax and grow old. His hopes for peace and absolute boredom are annihilated when Jacquelyn makes a clumsy attempt on his life. Gabe’s fascination with Jacquelyn sprouts in their first meeting and continues to grow as they spend more time together.

Jacquelyn realizes that all of her preconceived notions of Gabriel were entirely inaccurate. He does not have rotten teeth or the malodorous body that she believed was synonymous with pirates. Instead, he is absolutely gorgeous and determined to get into her bed. Despite how difficult it is to ignore Gabe’s advances, Jacquelyn knows she must. Dragon Caern Castle, her number one priority, is falling on hard times and it is up to Gabriel to bring back its former prosperity. Since Gabe did not retain any of the spoils of pirating, he must behave as other men when they need large sums of money: marry a wealthy heiress. Of course, that is easier said than done when you consider that Jacquelyn is the one who must teach Gabe just how to woo a woman in polite society. How on earth will she teach the one man she has ever been attracted to how to flirt with another? If she survives being in such close proximity to Gabe, the next question is: How on earth will she stand by and watch him put his charm to the test on another?

Gabriel does not take his responsibilities to Caern lightly. Although he never expected to find both his brother and father deceased upon his return, he is willing to do whatever it takes to make sure the castle thrives. Gabe knows what he wants in a woman. and quickly realizes that Jacquelyn is the only woman who has ever gotten under his skin. He is determined to help her release her inhibitions and enjoy the time they have together. What Gabe doesn’t know is that someone is still plotting to permanently remove him from Caern. Not for revenge, but for money. It is rumored that there is gold hidden in the castle, and an unknown enemy is willing to kill anyone who stands between that person and the loot.

PLEASURING THE PIRATE grabs your attention from the first page. Readers will laugh when poor Jacquelyn tries to kill Gabriel, and squirm when he starts seducing her. The chemistry between Jacquelyn and Gabe is absolutely amazing. Jacquelyn’s embarrassment over her parental background causes her to stray away from sexual dalliances because she refuses to end up a soiled dove like her mother. Gabe still thinks like a pirate in many aspects. He believes that anything or anyone he wants is his for the taking, and Jacquelyn is no exception. These two are so well matched that readers will smile even when they argue.

Gabe’s nieces are absolute gems and cause many laugh out loud moments. Hyacinth is the eldest at 12 and is desperate to become a lady. She’d better be careful because there may be someone watching her with less than honorable intentions. Daisy is the next to eldest and is the true brain of the family. She is always the voice of reason and concocts the most elaborate schemes. Lily is the youngest Drake and is the sweetest little thing. The twins are older than Lily and are identical in every way. Other colorful characters include Meriwether, Gabe’s partner in crime from his days as a pirate, and Father Eustace, who once was a womanizing drunkard.

Another one I can't wait to read, in the mail to me now.

I'm so glad you enjoyed my PLEASURING THE PIRATE. I want to invite your readers to pop over to my website and enter my PIRATE NAME CONTEST. The winner will receive my backlist, a whole box of books I picked up at RWA in SF, and a $25 gift card from B & N. Pirate Booty, indeed!

All they have to do is send in their own original pirate name. I want readers to have a taste of the joy of my job, the joy of "making things up." So pop on over to www.emilybryan.com and have some fun!

I dearly enjoyed the first book and so excited about this book! Huge congrats on the review Emily. its going to be great!!!