A Perfect 10: KISS OF FURY by Deborah Cooke 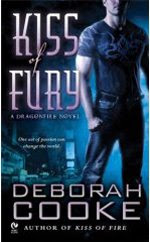 When scientist Alexandra Madison awakens in the hospital, she is haunted by memories of watching the invention she dedicated her life to completing destroyed by fire, and watching her invention partner, Mark, be brutally tortured and murdered. Suffering from horrific nightmares and refusing to answer any questions surrounding Mark’s death, Alex is slated to be moved to the psych ward. The Green Machine she and Mark invented will literally change the world if she can present a completed prototype to the investor who is willing to start production on it if it is viable. Alex has just days to get to the secret second prototype and make some additional changes to prepare it for the unveiling. But first, she must escape the hospital before they move her. Weak from the injuries she received in the fire, Alex is more than willing to be kidnapped by the compelling man in scrubs who grabs her and runs. As soon as she stops hallucinating (those can’t be actual sparks shooting between the two of them) Alex will ditch him and run straight for the prototype.

Just as a lunar eclipse draws near, one that is prophesied to cause the second of three firestorms (matings), Pyr warrior Donovan Shea is assigned to protect Alex Madison from the Slayers bent on destroying her creation. The shape-shifting dragons are at war. The Pyr are guardians of the four elements and the earth’s treasures. The Slayers are intent on eradicating humans and Pyr so that they alone rule the earth. By destroying Alex’s invention, the Slayers are hoping to accelerate the earth’s fury to fuel their goals. While Donovan will do his part in the war, he is shocked to find that Alex ignites his firestorm. He has never wanted a mating and will staunchly refuse any attempt to lure him into one, prophecy or not. While Alex may be the foreseen Wizard, Donovan believes that he is not worthy enough to be the foretold Warrior. He will protect her with his life, but he will walk away once Alex is safe. That is easier said than done once Donovan realizes that she is the perfect woman for him on every conceivable level.

Additional characters include the Pyr leader Erik; Donovan’s mentor Rafferty; Smith Quinn and his wife Sara; prophetess (Wyvern) Sophie, the only female dragon; Slayer leader Boris; Erik’s son Sigmund; and Slayer Tyson, who holds a personal grudge against Donovan. Several emotionally devastating events in his life cause Donovan to doubt both himself and his decisions. While all the Pyr and Sophie are certain that he is the Warrior and he must follow through with the firestorm, Donovan can’t even imagine bringing a child with his genes into the world. Alex is appropriately the Wizard and is constantly thinking of creative ways to solve problems, including the firestorm. As their need for each other grows with the approach of the eclipse, the danger to their lives also intensifies as the Slayers decide to focus on preventing the firestorm of Alex and Donovan.

KISS OF FURY is a character driven fantasy that is sure to please fans. Alex is an intelligent, determined, and courageous heroine. She believes in herself and her project and will do anything to bring it to fruition. She soon widens that belief to include Donovan, even after being terrified by watching the Slayers at work in dragon form. Donovan is certain that he knows himself fully, but after seeing Alex attacked by Slayers, he finds that he possesses many hidden facets. Strong, heroic, and fierce, Alex’s belief and trust in him propel Donovan to finally accept his inherent goodness. Epic battles, suspense, ecological concerns, humor, and romance are highlights that readers can expect in this tale. Excellent writing, a smart story, and exceptional characters earn this novel the RRT Perfect 10 Rating. Don’t miss the very highly recommended KISS OF FURY.

Great review, in my TBR pile right now, can't wait to get started.