A Perfect 10: INTO THE SHADOW by Christina Dodd 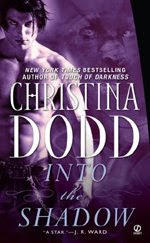 The Himalayan Mountains on the Nepal-Tibetan Border, the Present

Motherless since five, Karen Sonnet was raised by her father to be tough, to be a survivor. It looks as though she'll need all her skills to fulfill her assignment as project manager on this latest addition to Jackson Sonnet's international chain of adventure hotels. This job has more than its share of problems; its superstitious construction crew believes the location is unlucky, even evil. The one bright spot of the job is the nightly visit of her mysterious lover.

A millennium ago, a sadistic warrior named Konstantine Varinski made a deal with the devil so that he and all his descendants could change at will into fierce, predatory animals and birds. The cost? Their immortal souls, of course. What other coin does the devil deal in? Since the bargain was struck, the Varinskis have multiplied by impregnating as many women -- willing or not -- as possible. And they only ever have sons. The large Varinski tribe still flourishes today as killers for hire. But forty years ago, the contemporary Konstantine broke from the pack; he fell in love with a Romany woman and gave up the family trade and name. Konstantine and Zoranna moved to the U.S. and grow grapes in Washington State as the Wilders. They produced four children, three sons and -- miraculously -- one daughter. The male Wilders still have the ability to change, but Konstantine has done his best to teach his sons to battle against losing their humanity. How well he succeeded with two of his sons can be found in the first two books of the Darkness Chosen series, SCENT OF DARKNESS and TOUCH OF DARKNESS. This is the tale of the Wilder who stepped into the dark.

Aldrik Wilder is an unknown name in the mountains and valleys between Tibet and Nepal that give cover to mercenaries and bandits. Another name is well known and feared, however, and that is simply Warlord. Warlord rules the area with a loyal band of followers who prey on tourists and others. Was he in his panther form when he first caught the scent of the woman at the construction site?

Whether the locals are right and Mount Anayo is taking revenge against the workers who uncovered an ancient grave or it is merely indifferent nature that starts the huge landslide doesn't matter in the end. What matters is that Karen is there to rescue an icon of the Virgin Mary from the clasp of the child in the grave before she's rescued by her night visitor...the visitor she wasn't sure was real or a dream. Oh, Warlord is real, all right. He's saved Karen's life and he's keeping her -- willing or not.

Just how deep into evil has Aldrik sunk? Can Karen and love redeem a soul so lost? When the pact with the devil was made a thousand years ago, the Varinski family icon was torn into four parts and flung to the corners of the world. The devil doesn't like that two of the four parts have been found. All the many murderous Varinskis are determined to stop the parts from coming together lest they lose their powers. They must keep the icon Karen found from joining the two in the Wilders' possession.

INTO THE SHADOW is a powerful book, sensual, even erotic, but also otherworldly and mystical. Warlord is an unlikely hero. In fact, he reminded me somewhat of those old bodice ripper romances in which the heroine was ravished against her will until she fell in love with her ravisher. I should have remembered that Ms. Dodd is better than that. While INTO THE SHADOW is darker than its predecessors, the series is about redemption of condemned souls, after all. (Konstantine is ill and his soul will suffer in hell for eternity like all Varinskis if his sons and their loves are not able to unite the parts of the icon.) Warlord shows what can happen when someone gives in to his darkest urges. How and when Aldrik comes out of the shadow makes a compelling story.

The characterizations of both Aldrik (Warlord) and Karen are deep and moving, and so is the tale of their love. For it does eventually come to that, but a more turbulent love affair would be hard to find. There will be separation, more danger, a happy reunion...the plot is rich in emotional as well as exciting scenes. Minor characters play important parts, Warlord's lieutenant for one, Karen's father, and some very nasty Varinskis to name a few others. Still to come, however, is the much anticipated book about the first Varinski (Wilder) daughter to be born in a thousand years. That one will contain a few surprises, and you can take that to the bank.

I don't award many Perfect 10s. I thought about doing so for INTO THE SHADOW because of its power, but hesitated because Warlord had committed so many evil deeds. But then I realized that that is one of the things that make this book so powerful. What is the redemption of a mildly naughty boy compared to what Aldrik goes through? Georgy Porgy compared to Crime and Punishment? Well, maybe Aldrik isn't quite that tortured. But here it is: I enthusiastically award a Perfect 10 to Christina Dodd's INTO THE SHADOW.