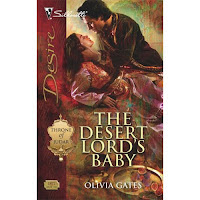 When Carmen meets Sheikh Farooq Aal Masood, her world stands still and she falls instantly into love with the man. The attraction is mutual, but Farooq gives Carmen only three months in his presence. He tells her straight up: she will stay with him, be his mistress, and then he will tire of her and cast her away. There are no surprises as he commands her to be his mistress temporarily. But, it's only a few weeks later when Carmen runs away from this Eastern Prince. Impossibly, she finds herself pregnant after doctors had declared she was barren. Anxious to keep her precious secret to herself, Carmen flees from Farooq's apartment in New York and out of his life. But not for long.

Sixteen months later, Farooq himself stands outside her apartment door listening to Carmen converse with her baby -- his daughter, Mennah. Now, the Crown Prince of Judar has much to lose, but he will not lose his nine-month child; it is she who will secure the throne for him once and for all. Even if it means he must take Carmen as his wife, Farooq will comply, but before this day is over, Mennah will be his.

THE DESERT LORD'S BABY is a wonderfully rich and passionate story of romance and mystery in the desert lands of the far East. Carmen turned her back on her love for Farooq when she ran away from him, determined never to let him find out about Mennah, lest she lose the only child she will ever have. Carmen erased all trace of herself and went into hiding, but Farooq found her, and now he wants Mennah. His lush life in a massive palace befits the Crown Prince he has become, and even though Carmen reluctantly travels over the ocean with him, she knows she will never fit into his world. Even so, she must protect Mennah and keep her baby close. Carmen and Farooq burn for each other, but suspicion and doubt cloud their happiness, while treachery threatens their world.

The secondary characters are exceptionally well drawn and include Hashem, Farooq's faithful assistant, and their tiny little girl, Mennah. The first book in the Throne of Judar miniseries, THE DESERT LORD'S BABY is Ms. Gates phenomenal debut in the Silhouette Desire line. The wonderful story in this book will continue as Farooq's brothers get their own stories; Shebab's in THE DESERT LORD'S BRIDE, coming in July 2008; and Kamal's in THE DESERT KING, September 2008.

I can't wait to read these books! And for now, be sure to snap up THE DESERT LORD'S BABY before all the copies are gone!