Win a copy of THIGH HIGH by Bonnie Edwards 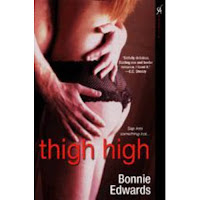 Want to win a copy of THIGH HIGH? Then just post away and I will draw ONE winner on Monday evening (24th) who will get a copy. One entry per household and I will only give you 48 hours to claim your prize.

To learn more about THIGH HIGH and Bonnie Edwards, be sure to visit her website at http://www.bonnieedwards.com/

Here is a copy of RRT Erotic's review of THIGH HIGH:

Three hot stories that will have you running out and buying some thigh highs of your own to surprise the man in your life… ;-)

Kat Hardee has been harboring a secret crush on her next door neighbor Taye Connors for months. When her friend and neighbor, Celia, challenges Kat to go after Taye, Kat has to shake off her initial shyness and figure out the best way to attract him. Then a mix up has Taye literally showing up on her doorstep.

Taye receives a delivery that he mistakes for his and opens it. To his surprise there is an assortment of sexual toys and garments (including thigh highs) that send his libido skyrocketing when he discovers the package is really for Kat, who he learns is a party products demonstrator. After delivering the errant box to its rightful owner, Taye and Kat get to know each other and are soon embarking on an affair where the sex is great but both wonder if there’s a future together for them.

Oozing with sensuality that scorches the pages, Thigh High is a great way to open. Kat has insecurities about attracting Taye, while he feels the same about her! Once they get over their initial threshold of “is this the right thing for them” then Thigh High evolves into a wonderfully satisfying romance. If you’re like me, you’ll be rooting for Taye and Kat to have their happily ever after.

Matt Crewe and Carrie MacLean are attending a charity auction at Perdition House that is unlike any other auction: men are sold to women for a weekend of sex. Unbeknownst to each other, both are there investigating Perdition House to expose it for being no more than like a whore house. But neither expects the effect staying there has on them. Immediately attracted to each other in a lustful, primal way, it ends up with Carrie buying Matt for a weekend neither may soon forget.

However, what Matt and Carrie don’t realize is the powerful magic of some very convincing ghosts. Is the attraction between Matt and Carrie real, or just the result of ghostly shenanigans?

Bonnie Edwards gives readers a treat with another story set at the ghostly mansion of Perdition House. We also revisit Faye Grantham and Liam Watson from the Midnight Confessions books.

The sensual illusion that engulfs Matt and Carrie in Parlor Games is intriguing, but even without it, the attraction between them is genuine. But with each having their own agenda, and with ghosts who apparently are aware of this fact, it will only be a matter of time before their mission will come out in the open. The sex is hot, the story is good enough that I wished for a longer version. Ah, well, maybe there will be more tales from Perdition House. We can only hope!

Francesca “Frankie” Volpe is a woman with a secret and has a very big problem at the moment. While on a yacht trying to retrieve a diamond encrusted thong (yes, diamonds as in gems you normally wear as jewelry, not as underwear) for her sister when a scruffy dog that’s hanging around grabs the thong and takes off. Frankie’s chase of the mutt ends up at the float home of disc jockey Daniel Martin.

Daniel likes his vagabond lifestyle and his job working nights at the radio station. When one very attractive Frankie lands on his dock, he’s instantly attracted. He’s aware she’s not completely truthful with him, but he slides past that. He’ll do anything for her, even though she might be on the run from the law, if it means Frankie’s in his bed.

Totally fun and even more so sizzling hot, Twinkle, Twinkle, Little Thong is full of surprises and a bit of humor. I mean, who would wear a diamond thong? Wouldn’t it be painful to sit down? While Frankie and Daniel worked on getting back the entertaining bit of glittery underwear, Ms. Edwards had me a little fooled as to what Frankie’s secret was, which made the whole story highly entertaining. As for Daniel, he’s totally smitten with Frankie, but when a career bump has him trying to decide which way to go, even that kept me guessing.

After reading all three stories in THIGH HIGH, I found it hard to decide which was the best. I finally came to the conclusion that all were unique and equally enjoyable. I suspect you’ll feel the same. Grab your copy of THIGH HIGH and be prepared for some non stop reading.

I would like to win a copy of Thigh High. I have this on my to buy list. Looking forward in reading it.

Wow, three steamy stories in one book. Can't wait to read it.

I would love to enter the giveaway!

I have been wanting to read this one for a while now, but haven't gotten around to it.

I would love to enter.. Bonnies books are out of this world and i havent had a chance to get this one yet..

I'd love to enter, too. Thanks!

love them steamy romances, count me in, thanks patti

Definitely count me in, please! This has been on my wishlist for a while now :)

No, I can't imagine sitting wearing a diamond thong, lol. These sound good, count me in, too.

Did you notice, two very different books with this title just posted one after the other, lol.

Three steamy stories, count me in!

I would love to win a copy of Thigh High. Bonnie writes hot stories that will have you needing a bucket of ice near you while you read her books :-)

Pam, yep, I wondered when someone would notice the two similarly titled books. Hah, rest assured that this is Bonnie's book that is up for grabs, though I'm sure some of you wouldn't mind Christina's.

I wouldn't mind Christina's book :-) I did see that both Bonnie & Christina had the same titles. Lately I noticed that with a few books now.

Hey everyone! I've had a couple people notice the titles. Mine was released in Feb, while Christina's came out just this month.

I realized this co-incidence a few months ago when I began preparing to promo THIGH HIGH.

I thought, wow! Great minds. Either that, or I have a bent for marketing that I've never used. My editor likes the titles I come up with.

I think the covers are so different that no one will make a mistake. And if Christina's readers get curious about my books...well, hey, that's cool.

I'd be happy to send along a signed bookplate to the winner of THIGH HIGH. Just contact me through my site with your snail mail addy.

Re: the thong. I created it for the story then a few weeks later read about a *real!* one on auction at a NYC auction house. Ouch!

But, I figured, hey...it's serendipity and again: great minds.

Whoever wins the book: you'll be surprised what happens to that thong...really surprised.

Great cover, Bonnie. Count me in for the contest because I love winning prizes. I can't wait to try your book. Hope I win. Happy Easter.

please enter me, gosh would love to win this one!!!!1 whew hothothot