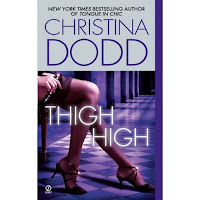 High on the seventy-sixth floor of the Premier Central Bank Building in Philadelphia, PCB's reclusive CEO Jeremiah "Mac" MacNaught stares raptly at the security tapes of the bank's New Orleans branch. He freezes the frame on the face he can't get out of his mind. He doesn't want to be attracted by her: she's his number one suspect as mastermind of the annual Mardi Gras bank robberies. Every year for four years, two cross-dressers enter one of his banks -- nothing unusual during Mardi Gras week -- and hand the teller an amusing note demanding a ridiculously small amount of cash. They've never hurt anyone and so have entered the folklore of the Big Easy as the Beaded Bandits. Mac's investigator has returned from New Orleans with nothing to work with and half in love with Mac's prime suspect himself: the branch's assistant manager, Ionessa Dahl.

Nessa's brains and charm are the ones behind the smooth and profitable running of the Chartres Street branch of Premier Central in the French Quarter, but credit and bonuses are unfairly stolen by the nominal manager, Stephanie Decker, known among the employees as Stephabeast. Still, Nessa has hopes that the office being readied means a promotion at last. Alas, it's for an insurance investigator, a Mr. Mac, being sent to solve the Beaded Bandit case before they strike again this year. And she has been appointed his assistant.

The tall, ruggedly handsome stranger entering the bank setting all female hearts aflutter, and garnering cautious respect from the males present, introduces himself as the investigator, Jeremiah Mac. Nessa is not immune to Mr. Mac's appeal, but as they work together going over old case files and interviewing witnesses, she wonders what made him so cold.

There couldn't be more contrast than that between Nessa and Mac. Nessa is the essence of New Orleans. The Dahls are a prominent old family now reduced to three women who live in the old run-down Dahl House in the Garden District owned by Nessa's two great-aunts, Miss Hestia, eighty, and Miss Calista, eighty-two. It seems all New Orleans is eagerly anticipating the traditional Mardi Gras open house at Dahl House. The whole town loves the Dahls. Mac, on the other hand, is not universally loved -- desired maybe, but not loved. (Someone actually hates him.) Except for his build, his undeniable sex appeal and lack of a mustachio to twirl, Mac could have played the villainous banker who throws widows and orphans out of their homes in the old melodramas. An upright, uptight Yankee in the Big Easy.

Nessa and Mac are wonderful characters who epitomize the theory that opposites attract, and it's much against their will...and that's especially true of Mac. He's torn between the physical attraction, his craving for the warmth radiated by Nessa, and his belief that she's the mastermind behind the thefts from his bank. What fun! These two aren't the only engaging and/or quirky people around, though. You'll love the aunts and Maddy, who is nearing one-hundred, but runs the kitchen like a little general. Other cases in point are the Dahl House boarders. There are the mysterious Pootie DiStephano, who lives in the attic; the cross-dressing entertainer Daniel (Dana) Friendly, who gives Nessa fashion tips; Ryan Wright a street musician who keeps hitting on Nessa and his friend Skeeter, who doesn't live there but mooches meals; and Debbie Voytilla, who wants Ryan. Nessa wants that promotion badly so she can rid the house of boarders to take the burden off her aunts, but Stephabeast's sly reports to the main office -- they mustn't be bad enough to get Nessa fired or she might have to actually do her job herself -- put paid to that.

Whether writing historicals, paranormals, or contemporaries such as THIGH HIGH, Christina Dodd is a master. She can quickly sketch a minor character to make him or her unforgettable or take her time while fully developing her protagonists. She's equally able to set a dark scene or one that delights as with the post-Katrina New Orleans of THIGH HIGH, where the city itself is a main character. She pours both humor and passion into the relationship between Nessa and Mac. And don't forget the Beaded Bandits.

THIGH HIGH is a winner I highly recommend.

I love Christina Dodd and the other books in this series. They have been great. :-)

Thigh High is the best of Dodd's series about the Manly brothers. Among the secondary characters, Maddy is my gal! She has her priorities straight. Page 341. Die laughing.

I wish Dodd had given Jeremiah a mustache to twirl!

I read this one with stopping, something I haven't done with a romance lately.