Surrender to the Highlander by Terri Brisbin! 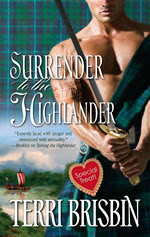 Don't forget we are having a chat Wednesday night in the RRT Chat Room with Terri Brisbin! Chat begins at 9pm eastern time and there will be prizes given away: two $10 amazon gift certificates and Terri is throwing in a Scottish gift for each of those two winner also!!!

Just go to http://www.romrevtoday.com/ and click on RRT Chat to join the fun.

Hope to see you there! In the meantime, enjoy the review of Surrender to the Highlander by our own RRT Staff reviewer:

At one time, Rurik Erengislsson, an exiled warrior from the Northlands, only wanted his powerful father’s approval and a place in his home. But as a bastard, Rurik and his mother were easily forsaken, and Rurik left the north and made a home for himself in Scotland with his mother’s family, the Clan MacLerie. Now, his father, who has ascended to the high position of Earl of the Orkneys and rules over the Orkneys and lands in Sweden and Norway, wants Rurik to return and take over control of his lands in Sweden.

Rurik will no doubt miss his clan, but he cannot deny his heart’s desire, and so he begins his journey north with high expectations. Yet a delay in the form of one young woman soon has him frustrated. Rurik is not the only exile being called home. The daughter of his father’s most trusted advisor has lived at a Scottish convent for the past ten years, and Rurik is assigned the task of escorting her home. However, Margriet Gunnarsdottir is not what Rurik anticipated. She is not the young girl he envisioned; she is unwilling to return to her father, and she is a nun. What’s more, Rurik is highly attracted to her. He must find a way to temper his unholy desire for her, but as their journey progresses, he only becomes more captivated with Margriet until he begins to question what it is his heart truly wants.

Margriet carries a deep secret that makes a reunion with her father one that she dreads. However, there is no doubt Rurik will deliver her. He is a strong and honorable warrior and as she learns more about him, Margriet wishes they had met at another time before the circumstances in her life grew dire. She is also regretting her impetuous decision to masquerade as a nun. With Rurik, she longs to shed her disguise and trust him with all her secrets, but to do so would risk his scorn as well as her heart.

SURRENDER TO THE HIGHLANDER is a seductive, vivid love story between a sexy hero and a strong heroine. Rurik and Margriet are so well depicted and their circumstances are so sympathetic that readers are immediately caught up in their journey, both the figurative one and the literal one. Rurik’s predicament over his feelings for a “nun” is an interesting trial for a hero and one that creates all sorts of turmoil for Rurik and Margriet. The sexual tension runs high between the two, but both are desperate to repress it. This adds to the inner burdens that they already carry. Rurik is struggling to find his place with his family and Margriet’s secret is huge, one that could cost her much. Her plight is particularly poignant, pulling at the heartstrings so much so that readers cannot help but care for her.

Rurik and Margriet are, in effect, star-crossed lovers with seemingly insurmountable obstacles hindering their way to happily ever after. This, however, makes for a highly emotional tale that is vastly entertaining. It’s rich in historical detail, laced with the perfect amount of passion, and enhanced with intrigue coming from Rurik’s crafty but villainous half-brother. Thorfinn’s devious scheming leads all the players to a climactic moment in the book when Margriet’s secret is revealed, Rurik’s loyalties are tested, and agonizing choices are made.

Ms. Brisbin continually delivers highly satisfying romances and SURRENDER TO THE HIGHLANDER is another winning effort from her; don’t miss it.

Patti and Terri, it was a great chat!! Really looking forward to getting and reading this one!