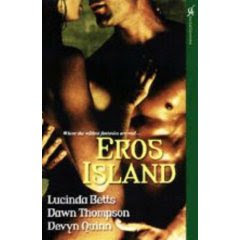 See below for a contest to win EROS ISLAND!

Three of today’s hottest authors put their own sexy spin on tales in which gods and goddesses feature. If you like your stories a little different, a bit dangerous, and most of all, deliciously steamy, then this anthology was created just for you.

Two men vie for the right to be Princess Akantha’s Champion. King Lycurgus is the sensible choice as an alliance with him should bring peace to her people, but then there’s Chiron, the King of the Centaurs. Chiron believes Lycurgus has an alliance with a god of death and destruction, and he’s determined to save Akantha or die trying. But Akantha has difficulty picturing a centaur as her consort. Can the Mother Goddess convince Akantha to follow the path to true love, or will chaos reign in Crete?

Gar Trivelyan is lucky to make it to land after the ship he’s traveling on wrecks. Unfortunately, it appears as if his luck has run out, for if Gar’s wounds aren’t soon tended, death is sure to claim him. Stumbling upon a Celtic Dream Well, a thing Gar didn’t really believe existed, he makes a wish for healing. When a beautiful goddess rises out of the well and grants Gar his wish, she also gives him one more surprise, as it’s Samhain, she’s entitled to choose someone to sate her lust, and she’s chosen Gar. This could be a case of be careful what you wish for, or it could be the dream of a lifetime, only time will tell.

When Danicia Ryan, a talented sculptor, completes her latest piece, a statue of the Greek god Herakles, she should be satisfied, after all, it’s the most exquisite piece she’s ever done. But, creating the superb statue has cost Dani more than just two years of her life, it cost her a marriage as well. And when Herakles comes to life, ready, willing, and able to satisfy her most carnal desires, Dani has to wonder, has her creation absconded with her sanity as well? Can statues really come to life, or has an artist’s fevered dreams led her to believe that the impossible can become reality?


Gods and goddesses are, just like mortals, each unique individuals. Some are merciless, others seek only to give pleasure, beautiful, handsome, noble or sneaky, you never know what can happen when humans become embroiled with them. After reading these three fantastic tales, you may decide to run the other way if you ever stumble into a deity's path, or you might just be inspired to take the chance of a lifetime and follow wherever they lead. Don’t miss EROS ISLAND, a book where dreams come to life and your darkest fantasies are but a heartbeat away.

Win a copy of EROS ISLAND by posting in this thread. Do you want this book? Why? I will draw a winner on SUNDAY night, March 2nd!
Contests Spotlight review

Laurie G said…
I'd like to read Dawn's last story! I knew that she was sick but hadn't heard that she had passed on.
Also, I like the idea of the stories covering 3 very different time periods of history and getting the varing perspectives of Gods/Goddesses and love. Throw in a bit spice ...WOW!! VERY ENTICING STUFF!! I'd love to win this book "Eros Island"!!
2:43 AM

Cherie J said…
I would love to win this since I know this is Dawn's last work. When I heard she had died earlier this month I was so saddened that the writing world had lost such a talented author. The other authors in this anthology are also talented as well.
11:07 AM

tetewa said…
My favorite genre to read is paranormal and this is three great authors who have wrote this book. My deepest sympathies goes to Dawn's family.
12:01 PM

limecello said…
This book sounds great! I love the cover, and really like the mythological references. I was really into classical mythology. Really. In fact, after reading the blurbs, my first thought was "Did Chiron train Herakles?" Haha, I'm so geeky. I'd love to win this book!
2:07 PM

Fedora said…
I did read on another blog about Dawn's passing--what a loss for the reading community, and my heart goes out to her family.

The book's premise sounds fun and fascinating--it'd be pretty interesting to read about some mythology come to life :)
8:58 PM

Unknown said…
I would love to win this book.. it sounds awesome..
very sad to hear of Dawns passing ..i knew she had been not good..
2:50 PM

Lil said…
I would like to win this book since the story blurbs sound so wonderful. I have read stories by Lucinda and Devyn and they sweep me away. Dawn's work would be new to me and I am so sad about her passing.
12:03 PM

Anonymous said…
I would like to win this book. I am looking into exanding my reading interests and this would be a great place to start!
9:20 AM

Anonymous said…
Sounds like a great read! Enter me in the contest please. :-)
5:54 PM