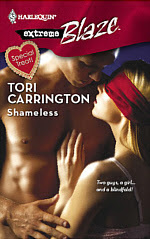 Nina Leonard has a reputation of dating a man for six months, then breaking up with him and being celibate for the next six months. Well, that cycle of getting involved is now about to start again, and her two best friends, Kevin Weber and Patrick Gauge (and her fellow co-owners of a business), are bemoaning that fact. All Nina wants to do is get laid and figures that once her “itch” has been satisfied, she’ll be set for the next six months. The question of who the man will be pops up -- and before Nina can take a breath, Kevin and Gauge are proposing that they be her mystery lover.

As shocking as the offer seems, Nina agrees. She cares for both of her friends, but is afraid of changing their relationship. Anonymous sex means she doesn’t know which one provided it; her “problem” is solved, and so the night of illicit sex transpires. It’s wickedly hot, fulfilling Nina’s every fantasy. But a funny thing happens -- she wants more of it, and neither man will tell her who her secret lover was. Oh, the audacity of men!

Once again, Tori Carrington has pushed the boundaries of category romance by penning a story that’s guaranteed to singe your fingers. Nina’s attitude of “sex with no commitment” is beginning to wear everyone down, including Nina. Although she sees her relationship with Gauge and Kevin as more brotherly than romantic, she has wondered what it would be like to have sex with them. As she decides, she has her little fantasies involving them, but reality proves to be better! Afterwards, she drives herself, Kevin, and Gauge batty trying to get one of them to admit who was the one to bring her to several fantastic orgasms. Just when she thinks she knows the answer, and acts upon it, the truth comes out. Oh, my, what a collision course Nina, Gauge, and Kevin are on.

SHAMELESS is wickedly hot and totally entertaining right from the first page. While the premise of two guys, one woman isn’t new, the way Tori Carrington pens it means you’re in for a terrific treat. March yourself straight to the nearest bookstore and pick up your copy of SHAMELESS.

Oh wow, definitely want to read this one! I saw Tori had a few out recently. Are they connected books?