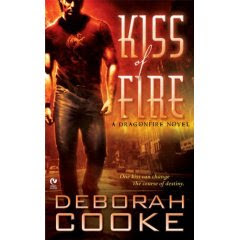 When Sara Keegan loses her parents and her beloved Aunt Magda in quick succession, she decides it's time to reevaluate her life. She quits her accounting job, moves to Ann Arbor, and takes over her aunt’s New Age Bookstore. Sara is still adjusting to her new life; she was always a great team player, gaining much inspiration from collaboration with her co-workers. Aunt Magda, though much beloved, was the family psychic, and Sara is not sure she believes in the paranormal. Her well-ordered world is about to be tested. Dragons are in the world, and they are after Sara.

Quinn Tyrrell is a loner -- the way he prefers his life. He practices an almost lost craft as an art form; he is a blacksmith. He usually prefers not to be involved with people, but one night he finds himself rescuing a woman being attacked – by dragons! Who better to rescue the lovely Sara than a man who is a dragon shape-shifter himself, a Pyr? Quinn gets an unexpected surprise when he touches Sara; he feels the beginning of the firestorm -- meaning that Sara is his lifemate, something all dragons long for. Though Sara is grateful for the rescue, she does not believe in dragons or firestorms. Reality has a way of knocking you over the head when you least expect it. Sara has met the sexiest, most wonderful man; she might be crazy because she sees dragons and the ghost of her Aunt Magda -- what can happen next? How would she know, she isn’t a Seer, is she?

KISS OF FIRE is the first of a tantalizing new fantasy series by Claire Delacroix, a veteran author writing as Deborah Cooke. In a delicious twist on the usual man/woman personality conflicts, Sara is the down-to-earth numbers cruncher, Quinn the sensitive, loner artist. Sara has experienced a lot of loss; she understands Quinn without being tripped up by her emotions. She always looks for a solution to a problem, no matter how large or weird, something her father taught her. She is a little powerhouse who bowls the studly Quinn over without breaking a sweat. Quinn may want to protect her, but she is not about to be left out of the action. In the classic battle of good and evil, it’s better to have friends you can count on. Ms. Cooke creates a familiar world, and with the introduction of ghosts and dragonshifters, it becomes a new landscape. There are a few unexpected twists of the plot, as well as a lot of action, but it flows smoothly and logically. It was a pleasure to read. KISS OF FURY, the second book, comes out in August 2008 and KISS OF FATE, the third book, in February 2009.