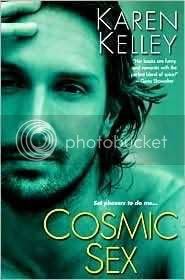 Quite some time ago, Kia’s cousin Mala left the planet Nerak for Earth in search of Sheriff (from Debbie Does the Sheriff), and Kia expected her to return at some point. When she doesn’t, Kia decides to go looking for her in case Mala is stuck and can’t get home. Earth doesn’t turn out to be anything like Kia expects, but Nick Scericino is one good thing she doesn’t mind in the least.

When the gorgeous and totally out-of-place woman walks into the seedy bar during his stakeout, Detective Nick Scericino knows things are about to go south. Like clockwork, one of the scruffy customers decides she’s fair game, and before too long a brawl breaks out. Nick and Kia are at the heart of it, of course, but he quickly hustles her out of the way. Good Samaritan that he is, he offers her a place to stay, and when she offers a bit more, Nick is quite happy to oblige. Then she mentions she’s from another planet, which is a somewhat wilting experience.

Kia is thoroughly happy with the sex on earth, although it’s a bit disturbing how uncomfortable Earthlings are with nudity. Chocolate is her second favorite thing, along with clothing, puppies, and...but she can’t get distracted. She came to get her cousin and then they are both heading back to Nerak, no matter that there are so many things she’s beginning to love about this planet. Now, if she could only find Mala.

COSMIC SEX continues the often hilarious, but always sexy, hijinks from the women of the planet Nerak. Kia, a professed warrior and protector on her planet, though as they have no wars, disease, or men, I’m not sure who is being protected from what, follows her cousin’s path to Earth and almost immediately misses the mark, but it brings her to Nick. Nick has a soft heart and, as his partner would say, a soft head, but when there is a girl in need, especially a gorgeous one, what’s a man to do? Still, her protestations of being an alien are, on one hand, scary, and on the other, well, scary again. She’s either insane or an alien, neither of which Nick is too crazy about. Then again, the world almost moves when they have sex, which, in his mind, forgives most idiosyncrasies. As Nick introduces Kia to Earthly pleasures (not those, get your mind out of the gutter!), the fun starts as her reaction to them is out of this world and his to her is “I want more.”

There is a bit of a suspenseful side plot with some bumbling criminals looking for a big score with the thought that Nick and Kia are their ticket. It adds a touch of additional flavor to the story, but the focus really is on Nick and Kia’s burgeoning relationship. Add in a few cute animals, and the recipe for a fun-loving romance and COSMIC SEX is complete.

The first book, CLOSE ENCOUNTERS OF THE SEXY KIND was so good and I'm so looking forward to COSMIC SEX. I have it on my wishlist! It was great reading your review Kathy.