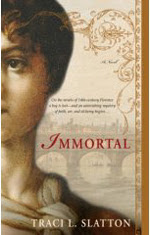 Luca Bastardo lives on the streets of Florence, stealing, begging, and hiding. Abandoned or kidnapped as a young child, the golden-haired boy only knows that he is different from the rest of the street urchins, for people have told him of a well-dressed lady who was frantically looking for her lost son years before. When he is betrayed by a boy he thought of as a friend, Luca finds himself in the clutches of Bernardo Silvano, owner of the most notorious brothel in the area. What happens to Luca, and the rest of the children that Silvano "buys" or "rescues" from the streets, is despicable and depraved, but Luca learns to shut out the horrors by thinking of the beautiful paintings and frescoes he's seen. Soon he comes to realize that he doesn't age like the rest of the children. Silvano holds the secret to Luca's past, and uses the threat of that knowledge to keep Luca bound to him.

One day Luca saves the lives of a Jewish man and his daughter, and the man tells him to come to him if he ever needs help. That point arrives on the day that Luca finally escapes from the brothel after twenty years of hell. But in his leaving, Luca makes a life-long enemy of the Silvano family. Luca flees to the relative obscurity of the Jewish quarter, where he lives with the kindly man he rescued. Taught to read and write, Luca's world opens to him. His meeting a mysterious alchemist will change how he deals with his future. Even at nearly thirty years old, Luca still looks no older than an adolescent, and he must be careful of the suspicious people who wonder why he hasn't aged. The alchemist tells him of the Cathars and how they differ from other Christians. Were his parents connected to this race? If so, how? And why was he abandoned?

Luca's search for his roots is the premise of this fascinating novel set during the Renaissance. During his long, turbulent, and eventful lifetime, Luca meets and befriends such luminaries as the artist Giotto, powerful politicians and bankers in the Medici family, and the brilliant, precocious Leonardo da Vinci, who, as a child, attaches himself to Luca, well aware that there is something incredibly fascinating about him. All along, Luca carries with him a dream of meeting a special woman, and he goes for decades searching for her. Will he find her?

Ms. Slatton's debut novel is an amazing, incredibly detailed account of the life of a man who could hold the secrets to religious history. A tortured soul, Luca manages to overcome the horrors of his life and learn to love when he is able, trust whom he can, and face an uncertain future, all the time hoping that someday he will learn about his origins. Historical details are wound through this intricate story. The research is impeccable; the characters, even the evil ones, will leap off the pages of this novel, demanding the reader's attention. Great dialogue and beautifully written, IMMORTAL should be on everyone's bookshelf. It's a remarkable story.