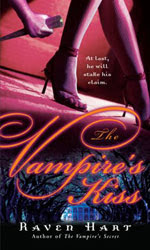 Savannah's most powerful vampire, William Cuyler Thorne, is in a killing rage. After mourning the death of his mortal wife Diana and their son Will for five-hundred-years, William finds out that they are not only alive, but allied with an enemy from his past. Hugo is a vicious and violent vampire who sired Diana and Will. Though Diana is mated to Hugo, William believes that their mortal love remains strong enough for him to win her back. But when Diana is given the choice of rejoining William in Savannah, not only does she rebuke him, she allows friends and companions of his to be wantonly murdered by Hugo and Will. Further, with the help of William's latest offspring and mistress, Eleanor, they kidnap Renee, the child of his heart. Renee is the young daughter of Melaphia, William's housekeeper and the most powerful voodoo priestess in the new world. Renee possesses the magical blood of her long priestess line which gives a blood drinker much added strength. William will travel to Europe to save her, even if it means giving his life to do so. He leaves his offspring, Jack, in command of Savannah as he goes in search of vengeance.

Jack is well aware that William's departure will cause challenges to be made against him. His good-ol'-boy nature fools many people, but Jack is a formidable fighter with an ingrained sense of honor. What Jack doesn't expect is that he will be dealing immediately with a threat to their 'family' from a group of angry, criminal werewolves, and his not-quite-human ex-girlfriend's request to be taken into the afterlife. When police officer, and werewolf, Seth Walker shows up with an interest in the problem werewolves, Jack is grateful to have some back-up. Somehow, they will cobble together whatever forces they can muster to maintain their control of Savannah and hope that William returns soon with Renee. However, very old and powerful forces are gathering together, and their agenda will threaten more than just the Savannah clan.

THE VAMPIRE'S KISS is a non-stop, action packed thrill ride. Told in two voices, William's is dark and brooding, Jack's is laid back and good-natured, the clash between the old world and the new is very apparent. William must confront deceit, betrayals, and a past he has long fought against. Jack must rise to the occasion amidst the remains of a lost battle and new confrontations. Jack is still deeply in love with his ex-girlfriend Connie, but even as she struggles to accept her non-human attributes and the many otherworldly creatures that she learns exist, she is scaring the socks off him (more than the fact that he literally burns to a crisp when they get romantic). Excellent writing, setting, and character development highlight fierce fighting and deep emotions. While not necessary -- this book stands on its own -- reading the previous books in the series will add insight and background information. Humorous moments lighten the intensity of the story (Jack's coffin is a bright orange replica of Dales Earnhardt's racecar) and add humanity to this paranormal feast. THE VAMPIRE'S KISS is a page-turning stunner you won't want to miss.