A Perfect Ten: MARKED BY MOONLIGHT by Sharie Kohler 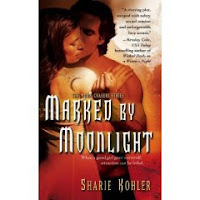 Claire Morgan is not assertive; the 31-year-old schoolteacher is timid, courtesy of an abusive father. Even in the classroom, she ignores the occasional outbursts, focusing instead on students who really need her help. For them, she goes the extra mile. That is why she finds herself in a bad part of town at night, looking for Lenny Alvarez to make sure he takes his SAT exam. She sees Lenny and chases him down an alley, but he disappears and a dog attacks her. A man appears, saving her from the dog. Claire’s life is about to change in ways she never imagined. Could it be true that she is now a lycan, a werewolf? As much as she loves the confident, sexual woman she has become, she is terrified of her new potential for violence.

Gideon March is part of a secret network, NODEAL, determined to eradicate the lycan threat. NODEAL policy is always the same: kill them all, even innocents infected by a bite, like young Lenny. Gideon must track down the woman bitten by Lenny and kill her before she turns. What Gideon discovers about Claire changes his weary obedience to NODEAL policy. He conceives a desperate plan -- to find and kill the Alpha who infected Lenny, breaking the curse on Claire. But can he break the curse before the new moon, when Claire will be compelled to kill and be lost to him forever? What do you do when the world as you know it changes by loving one who should be your enemy?

MARKED BY MOONLIGHT, the first book in The Moon Chasers Series, is very exciting and fast-paced -- the story of a secret war conducted between humans and lycans for centuries. NODEAL is all that stands between humanity and desolation, and only a dedication to duty, precluding love and family, enables the hunters to do their work. Burnt out by endless killing, Gideon falls in love with Claire and needs to save this one innocent. Claire, as a newly turned breeding lycan, is irresistible to male lycans, making her survival that much more complicated.

Claire survived an abusive childhood and is stronger than she realizes; when the stakes are high enough, she fights. Becoming a lycan has only enhanced the warrior qualities in this seemingly mousy woman. Gideon is the vulnerable one -- hardened by killing, he is truly alone. Claire turns his world upside down. Ms Kohler paints a vivid picture of her characters' steamy passions and what motivates their behavior. I came to care about this story and its characters, especially Darius, the lycan who will not feed. I hope he will be in the next story. Ms. Kohler creates a strong beginning to a new series, making it a Perfect 10. She also writes historical romance as Sophie Jordan. KISS OF A DARK MOON comes out in October 2008, and I look forward to reading it.