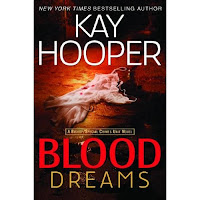 Dani Justice is haunted by nightmares. However, the difference between Dani’s nightmares and those of other people is that her nightmares are often premonitions of future events.

Dani has returned to her hometown of Venture to help her twin sister Paris after Paris’s divorce. At least that is the reason she gives for being in town. In reality, Dani and Paris both work for Haven, a private company created to assist law enforcement when regular investigative tools are not enough. Dani and Paris are both psychic, each with different abilities, and Dani has come to Venture in search of a serial killer. Dani doesn’t want to hunt for this killer, but he and her dreams have come too close to home. Only Dani knows how the hunt will end, but even she doesn’t know who will survive.

Special Agent Noah Bishop and his team have been trying to find a serial killer in Boston. The killer appeared out of nowhere and killed twelve women in a month, the last victim the only daughter of U.S. Senator Abe LeMott. Bishop is sure the killer has left the Boston area but he and his team are under orders from the new director of the FBI to remain on the case. But Bishop has many ties inside law enforcement as well as outside.

While Bishop waits in Boston, he knows that time is of the essence and that only Dani’s dream visions have given them any clues as to what is going to happen next. With the clock ticking and the killer starting a new spree in Venture, Bishop sends Special Agent Hollis Templeton to work with Paris and Dani.

Sheriff Marc Purcell has a history with Dani, and the connection they once had is still tangible even after Dani’s ten-year absence from his life. When a horrific murder is discovered, Marc learns the real reason for Dani’s return to Venture. While Marc wants to help and protect Dani, he will have to get her to lower her shields and trust him first.

As clues are revealed, the game with the killer only gets more complicated. They can’t predict what he’ll do next and he seems to be one step ahead of the entire team every step of the way. In order to stop him, Dani will have to open herself up and learn to trust her abilities; if she doesn’t, none of them may survive the trap laid by a very smart killer.

BLOOD DREAMS, the first book in Kay Hooper’s new trilogy and the ninth novel in the Bishop/Special Crimes Unit series, is spectacular. From the opening pages of the novel with Dani’s recurring premonition dream, to the final confrontation with an evil and sadistic killer, the tension never lets up. With its fast pace, high-adrenaline plot, cast of well-developed characters, and fluid dialogue, BLOOD DREAMS fills every expectation a reader could have for a well-written mystery/suspense. As always, the paranormal aspects of the novel enhance the story line, but rather than make the job of the various law enforcement agencies job easier, it sometimes make things just that more complicated. Readers will be treated to appearances of characters in BLOOD DREAMS from many of the previous books, including John Garrett and Hollis Templeton from TOUCHING EVIL.

While connected to the previous novels in the Bishop/Special Crimes Unit series, BLOOD DREAMS can be read as a stand-alone novel. However, unlike the previous individual books, even within the separate trilogies, BLOOD DREAMS ends with a shocking cliffhanger unlike any of its predecessors. According to the author’s website, this thread is carried through the next two books in the trilogy, BLOOD SINS and BLOOD TIES. Unfortunately, I’m not sure when the next one is scheduled to be released -- all I can say is it’s not soon enough for me! Don’t miss this highly suspenseful and entertaining novel, an RRT Perfect 10 and a book I highly recommend.

I just love Kay Hooper's Bishop/Special Crimes Unit series & am so excited to learn of another trilogy. Looking forward to reading this one. Thanks for the info!

Am looking forward to reading this one. Have been a fan of Kay Hoopers mysteries and her romances (very humorous) from quite some time ago.