A Perfect 10 -- THE SENATOR'S DAUGHTER by Christine Carroll 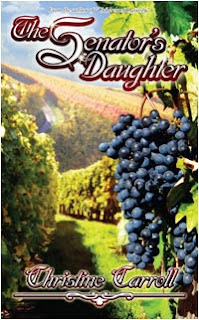 Society princess Sylvia Chatsworth and Assistant District Attorney Lyle Thomas don’t have much in common. Sylvia, the daughter of the esteemed Senator Lawrence Arthur Chatsworth III, is the product of everything that money can buy, the best heritage, education, and advantage. On the other hand, Lyle is the son of a poor farm worker who barely scraped enough money together to feed his family. Even so, Lyle worked hard and clawed his way up the proverbial ladder of success. These days he drives a fancy car, lives in a swank apartment, and earns more than enough to pay for it all. And he can’t believe his good luck when Sylvia accepts his offer of a date. He’s sure there is much more to Sylvia Chatsworth than the media would have one believe -- they claim she’s just a rich party girl with fluff for brains. Lyle wants to prove otherwise, at least to himself. But when Sylvia keeps him waiting at the bar in Ice, a popular San Francisco nightspot, for over forty-five minutes while she visits the ladies' room, and then snares him in a clinch, kissing -- no, devouring him -- in front of reporter Julio Castillo’s camera, Lyle begins to wonder if those rumors are true. His gut tells him there’s more to Sylvia than appears on the surface, and he decides to get to know the real woman beneath all the hype.

Yes, Sylvia comes from privilege and prosperity, but she isn’t the bubblehead everyone thinks she is. And yes, she did keep Lyle waiting at the bar in Ice, but only because she spent those long minutes shamefully hiding inside a bathroom stall while she listened to tacky Corrine Walker talk about her. And the kiss? Oh, that kiss was just to keep Julio’s camera and his inevitable probing questions out of her face. That kiss was an escape. But it also made her bones melt, and no other man has ever made her feel like that. Sylvia just wants to live her life without reporters popping up at every turn and distorting the facts. And she’d really like to get to know Lyle better, but for now, she just wants to run as far away as she can get. Even her own mother told her she should disappear just minutes ago, while they argued about her embarrassing so-called escapades. Having heard enough, Sylvia climbs into her Jaguar, drives north, away from the city -- and then she simply vanishes.

THE SENATOR’S DAUGHTER is one of the most romantic novels I have read this year! Practically all of San Francisco society thinks Sylvia Chatsworth is a spoiled little rich girl just out for a good time spending her daddy’s money. Of course, it didn’t help when her own parents decided to arrange a marriage for her with Rory Campbell. And when she refused the union, the press acted as if it were her fault the man dumped her and married his true love. Who would even want an arranged marriage anyway? Not Sylvia. She wants to do something with her life, but her parents insist her future is to marry and spend her days playing hostess at parties and charity events. That might be her mother’s world, but it isn’t for her. She wants something she can sink her teeth into, a real job.

Lyle recognizes that Sylvia is more than just a party girl. And when her father hires him to find his missing daughter, Lyle wrestles with his conscience. How can he take money from Senator Chatsworth for something he plans to do on his own anyway? But he's unable to locate Sylvia, so he decides to drive to Napa Valley and investigate another disappearance, that of San Francisco developer, Tony Valetti. Before too long, Lyle begins to unravel damaging facts that tie both Tony and his brother Andre to a murder. And biding his time while he waits for Andre Valetti to return home to his vineyard, Lyle checks into the Lava Springs Bed & Breakfast Inn. When he spots a woman who looks suspiciously like Sylvia working in the kitchen, he wonders, could it be her?

Many secondary characters populate this novel. Sylvia’s parents, Lawrence and Laura Chatsworth; the innkeepers, Mary and Buck Kline; the Valetti brothers, Andre & Tony; and Lyle’s father, James Thomas; and Lyle's best friend, Cliff Ames. With numerous twists and turns, there are lots of sizzling love scenes, dangerous intrigue, and plenty of heart warming, fairy tale romance filling the pages. THE SENATOR’S DAUGHTER is a novel not to be missed! And that said, I am pleased to award it a rare Perfect 10.

Oh this does sound good! I haven't read a romance suspense in so long! I shall be putting this on my wishlist!