A Perfect 10: HOT by Julia Harper 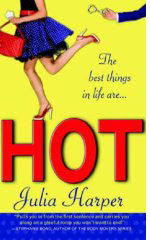 When the First Wisconsin Bank of Winosha is robbed by two men, one with a Yoda mask and the other with a SpongeBob SquarePants mask, teller Taylor Hastings sees her chance. During all the excitement and commotion after the police arrive, Taylor casually walks over to the bank president's desk, removes his safe deposit key, opens his box, and removes the contents. No one else notices, and Taylor is now set to exact the revenge she's waited four years to consummate.

John MacKinnon is the FBI agent called in to investigate the bank robbery. One of the other bank tellers recognizes the black hairy neck and back of a former schoolmate named Fish, and his friend Reginald (Nald) is probably his accomplice. Needless to say, these two men live in a world of their own and are prime examples of why close relatives shouldn't marry. But while John is watching the complete tape of the robbery, he notices a woman doing something in the background with the president's safe deposit keys. The president also watches the tape and, inside, his heart is sinking and his mind is working frantically to determine what damage has been done. But for some reason John immediately becomes intrigued with the woman who stares at the surveillance tape with a sort of smirk. Now, just what is going on, and where has Taylor gone?

When John gets Taylor's cell phone number, they begin a relationship built on their innermost needs. John is intrigued by Taylor's attitude and more than drawn to her through their conversations. He knows something is behind her attempts to find some evidence on Calvin, and yet, as an FBI Special Agent, he must continue to look for her and bring her in. Taylor is making up her actions as she goes -- on the run and sleeping in the old truck she gets from her friend Tommy, and eating her favorite thing, pickled herring. Her talks with John open an opportunity to connect with a man after years alone, but first Uncle Rusty and his arrest for embezzlement and subsequent death must be avenged. Taylor is driving around Wisconsin, trying to get evidence on Calvin, and John always seems to be step or two behind her, determined to bring her in, but also determined to examine their strange connection. Their conversations are true to life, and even the two criminals on the run will bring a chuckle as you hear their totally off the wall comments.

Julia Harper has certainly hit all the right buttons for me in writing this entertaining and unforgettable meeting between two people with hard times behind them. John is forty and divorced; three years ago his teenage daughter told him she wanted nothing to do with him and wanted her stepfather to adopt her. Taylor had only her Uncle Rusty in her life for a long time, and his death is at the heart of the revenge she has spent years plotting. She is living a life that doesn't reflect her true self, all to be in a position to avenge her uncle and bring the truth out. Each situation and character is seamlessly sewn together into the story, and we are drawn into their situation as Taylor and John must deal with her theft, and yet he has to uphold the law.

If you love quirky, unusual people, HOT has them all. First and foremost are Fish and Nald, two men who escape, try to get away with the money (exploded ink packs and all) and end up in a totally surprising situation. Taylor's friend Tommy is a character, always willing to share an old vehicle, and John's partner, Dante Torelli, comes complete with a history with John that must be overcome. Calvin Hyman is President of the bank, Mayor of Winosha, and about to become State Representative, if he can only get Taylor out of his business, and keep hidden his...well, you really need to read to find out why.

HOT covers all the must-have ingredients for an unforgettable story: great characters you enjoy, a story that grabs your interest, and the much needed chemistry between the couple that keeps us frantically turning the pages. HOT is a refreshing, funny, tug-your-heartstrings read that deserves a Perfect 10 from me, and I'm very particular! If you like HOT stories, this is just the book you need to look for this month.