A Perfect 10: ENCHANTING THE LADY by Kathryne Kennedy 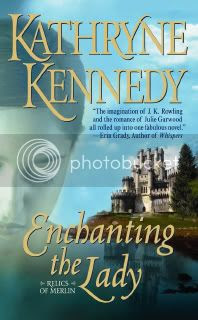 Lady Felicity May Seymour is a disappointment to her family. Well, perhaps that's a bit of an exaggeration. Her aunt and uncle don't seem in the least surprised that Felicity has such a tiny amount of magical power. But Felicity knows that her shame is about to be revealed to society as a whole. She has stood as Duchess-of-Honor Stonehaven since her parents' tragic deaths, and by rights, today she should become the Duchess in truth. However, Felicity didn't inherit their powers and, with the negligible amount she has, she'll certainly fail her tests and be relegated to the rank of a mere Miss.

Terence Blackwell, baronet and shape-shifter, is just outside Prince Albert's rooms when he smells the taint of relic-magic. Shifting to his lion form, Terence scatters noblemen and noblewomen alike in his search for the one who would dare to threaten the crown prince with the evil magic of a relic. Created by Merlin, the relics hold powerful magic that can't be defeated by hereditary magic. Terence's family has been successful in tracking down six of the thirteen stones (relics) so far, but in the process, his brother lost his life at the hands of one of the users. But then the scent disappears and Prince Albert appears to be safe. However, that all changes when Terence accompanies Prince Albert to the testing of the novices and Lady Felicity Seymour appears. Though he's immediately struck by her incredible beauty and the somewhat bizarre fact that she seems to be overlooked by everyone else, his senses also tell him that she's the source of the relic-magic scent.

Lady Felicity doesn't know it, but she's just caught the attention of an incredibly handsome and dangerous man. One who will do whatever it takes to get close to her and, if necessary, dispose of her.

ENCHANTING THE LADY is a phenomenal read. I found myself captured from the very first page where Felicity struggles to escape a pit of lava in her bedchamber and is found wiggling on the floor by a maid who can't see the illusion. Despite her knowledge that she appears daft, Felicity uses her quick wits to turn the maid's mind to other things, specifically the filthy state of the floor, why it's quite unsuitable for ones occasional wish to "wiggle." Felicity has been overlooked her entire life; servants have been known to trample on her, and she was even sat upon once by a society matron. So she's quite surprised when Sir Terence shows such decided interest in her. The man inspires outrageous urges in Felicity; despite that, she has the nearly irresistible urge to cuddle up to her own personal stuffed animal. For his part, Terence is fighting the urges of his were-self to declare his undying devotion to Felicity. His brother died at the hands of a woman he thought he loved, and Terence is determined to avoid such a fate. He will resist Felicity, no matter what.

Felicity's Aunt Gertrude and Uncle Oliver don't treat her badly, really; it seems as if they sometimes just forget she exists. Her cousin Ralph, on the other hand, delights in trying to scare Felicity with his illusions. Perhaps she should be grateful that he may have the power to at least keep the duchy in the family, but somehow, gratitude isn't exactly the word for what Felicity feels. Katie is Felicity's maid and, in the end, is a supremely dedicated friend as well. Bentley is a were-rat who works both for and alongside Terence. The two have been friends and comrades in the search for the relics for many years now. Manda is a shopkeeper with some magic of her own. Despite her wrinkles and small stature, the old woman holds a surprising fascination for men both young and old. Manda is Terence's friend and offers some very good advice to Felicity. Then there's Daisy, hmm…I probably can't tell you much about her as it would give away too much; suffice it to say, that she is one secondary character you're destined to love. I know I did.

Kathryne Kennedy does a fantastic job of integrating Terence's lion into his behavior, sometimes even astonishing Terence himself when his lion takes charge. Felicity has the true pride of a duchess, and despite the lack of love and attention in her life, she managed to grow into a young woman who would make her parents proud. I can't remember the last time that a couple seemed so perfect for each other.

It isn't often that a book captures my attention so thoroughly; however, ENCHANTING THE LADY with its superb blend of Victorian England, magic, shape-shifters, and characters who positively come to life, definitely did. This is one of those rare and wonderful books that will leave a smile lingering on your face long after you're done reading. Thank goodness this is the beginning of a new series, because I can't wait to visit this magical world again. I find myself compelled to give ENCHANTING THE LADY the highest praise I can think of, a Perfect 10. Brava, Kathryne!

I would like to thank Lori Ann for this wonderfully written and very kind review. I will admit that the first time I read it, I cried on my son's shoulder. (He was shocked; I'm not prone to tears.) Thank you so much.
Kathryne Kennedy

This sounds right up my alley! YAY! I have a new author to check out. I love it when that happens. :D