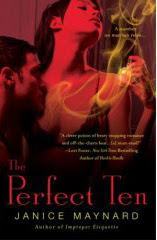 The three Killaney cousins, Diana, Elizabeth, and Jeannie may be feisty Irishwomen with some magic in their souls, but they are on the look out for men who can complete their lives. One night as they have come up with their newest product, a sensual cream that could possibly be an aphrodisiac, love may be just around the corner…

Damian Bennetti is known for fixing expensive and sleek cars. He also has a reputation as for being a ladies’ man, although his opinion is very different on that matter. But he does have a bad crush on one of the owners of the store, Lotions and Potions, that specializes in creams and perfumes. Diana Killaney has been on his mind a lot, and he makes a ton of excuses to come to the shop to buy.

Diana also has a crazy crush on Damian but, because of his reputation, she stays far away. Finally Damian asks her out and, before she knows it, they are kissing like there is no tomorrow. Diana assumes it is this new lotion she and her cousins have come up with that may have some magic in it, or so she thinks, because why else would a suave man like Damian want a no nonsense woman like herself?

Damian's and Diana’s first impressions about each other make their relationship harder than it needs to be. Damian grew up in a very poor family in a backwater town, while Diana has some men issues because of her father’s dating lifestyle. But when these two allow their attractions to take over, it is beyond hot! He Loves Me, He Loves Me Not shows that being honest and truthful along with some great sex make for the most excellent read.

Elizabeth is the oldest of the Killaney cousins. Almost forty, she is starting to feel her age, and it has been over a decade since she has even been intimate with a man. Her last relationship ended in ruin, and the thought of going down that path with another man leaves her shaking in her boots. But she is resigned to the fact that she may be alone for the rest of her life. That is, until she literally falls in the lap of Enrique Cantilano.

Enrique cannot believe how lucky he is to have a woman like Elizabeth fall into his arms. He is scouting out locations for a movie and had no clue that his latest job would also be a pleasurable one. He finds Elizabeth sexy even though she thinks she is quite plain, and he should know what’s attractive as in his line of work he runs into beautiful women all day long. But Enrique is able to seduce her, and as Elizabeth enjoys their lovemaking, how will she be able to work out their age difference and Enrique’s jet setting lifestyle?

I am such a big fan of the younger man/older woman romance and Movie Magic was the perfect story to showcase this. Enrique is such a wonderful man to see how beautiful Elizabeth really is even though she doesn’t see it. And when Elizabeth releases her inhibitions and becomes the “Lizzy” Enrique enjoys and loves, this story rises above all the rest. I also found the sex scene between these two the best out of the three stories, and Enrique is a true hero in every sense of the word.

I Dream of Jeannie

“Nerdy” college professor Nathan Hardison has been dreaming of Jeannie, one of the owners of Lotions and Potions, for over a week now. Ever since he walked into her store, he can’t get the blonde bombshell out of his head. Nathan usually looks at things very analytically, and he can’t understand why he is so far gone over Ms. Killaney.

Jeannie at first thinks Nathan is a shoplifter, but there is something about the way his butt just looks so good in his pants. Jeannie may look like a supermodel but her IQ is off the charts, and she tries to downplay her looks as much as she can. But when Nathan admits his attraction to her, she decides playing the naughty student to this teacher may be just the thing she needs.

Nathan and Jeannie are perfect for each other in almost every way. They have the brains and the looks, and the sex between them is scorching. It was ingenious for both to act out some role playing while in the bedroom. Nathan may think he is a nerd, but Jeannie thinks he is far from it. He wants to hold her close and never let her go, which made me sigh. I Dream of Jeannie is one dream that has come true for the professor and his student in love, Jeannie.

I am not usually a big fan of anthologies but with THE PERFECT TEN, Janice Maynard has written three sexy and overall great stories which deserve the coveted RRT award just as the title states. A Perfect 10 all the way!

After reading your review, I went out and bought this book. I haven't started it yet though... UNFORTUNATELY!