Contest and La Grande Mort -- HEAT OF THE NIGHT by Sylvia Day!

We're giving away this book to one lucky winner! Post away and I'll pick one lucky winner this coming Sunday night. One entry per household please and you must be at least age 18. 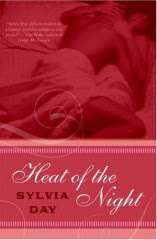 When the rebel leader of the Elite Warriors, Connor Bruce, finds a deadly new weapon in the hands of the Elders, he must travel to the mortal realm in order to warn his friend and rebel instigator, Aidan Cross (Pleasures of the Night), of the new threat to Aidan and his girlfriend, Lyssa Bates. It will be a one way trip for Connor, who has always been content living in the Twilight, but one he must undertake if the rebels have any hope of succeeding. Arriving at Lyssa and Aidan's home, in pain and weary, Connor is greeted by a tempting and sassy woman. While waiting for Aidan to return, he and Stacey spend a lot of time together, and the more he finds out about her, the more Connor is determined to have her. Stacey is the only woman he has ever met that both soothes him and turns him inside out. First however, Connor must face a vicious threat and keep them alive.

Lonely and upset, Stacey Daniels is house-sitting for her boss while her son is reconnecting with his irresponsible, absentee father. When an unexpected visitor arrives on the doorstep and pushes his way into the apartment, all of Stacey's warning bells go off. She has always been attracted to the wrong type of man, and the golden bad-boy who has just entered her life is no exception. Bossy, arrogant, and sexy, he is sure to run roughshod over her if she doesn't hold her on to her control. But, holding out on Connor Bruce for the dream of a stable, happy family is not going to work. When Stacey gives into the fantasy Connor offers, she doesn't realize the danger that will follow. She is now in danger of losing her life, her son, and her heart.

HEAT OF THE NIGHT is a richly woven delight. Connor is a man with no emotions or connections, making him a fierce warrior, until he meets Stacey. She makes him want things he has never dreamed of and becomes his sole vulnerability. Single mother Stacey has had a life filled with heartache and hardship. She doesn't trust herself or her emotions when it comes to men. Their intimate encounters are filled with both heat and emotional depth. The suspense, action, and mysteries are intense and imaginative. Excellent pacing, writing, and characterization will have readers glued to the story. This second Dream Guardian book stands well on its own with plenty of background, but reading the first book will add insight. This book takes the series to a new level, earning it the La Grande Mort rating and builds high anticipation for the next tale. HEAT OF THE NIGHT is a very highly recommended book you won't want to miss.

Email ThisBlogThis!Share to TwitterShare to FacebookShare to Pinterest
Labels: A Perfect 10, Contests

I have the first, too, and would love to be the lucky one here, lol.

I've heard so much about her books but haven't had the chance to read one yet. Sounds interesting!! Thanks for the chance to win it!!

Sounds great! I would love to read it!

I would love to win this book!

I'm sure I'll enjoy this book as much as I enjoyed "Ask For It."

Love love love Sylvia's books. This is the only one I don't have. Of course, if I don't win I'll sulk off to my local Borders, but this would be a fabulous ray of sunshine at the end of a rainy wet dreary So Cal week!

Can't wait to read it either way, Sylvia!

This is a great series, I really enjoyed Pleasures of the Night, and would love to read Heat of the Night.

Thanks for having this giveaway - I love Sylvia's books and would love to win this one! Have a great weekend :)

ALL your books are great. would love to add this to my collection. :-D

Sounds like a great book. I haven't read anything by her yet.

I also read the first book in the series and would love to get a copy of this!

I really loved Pleasures of the night and I would love to read Heat of the night. Can't wait to see how the series continues.

I've been reading/hearing a lot of buzz about this book and am very intrigued by it. I would love a chance to win it.

Ooooh! My book budget has been blown to smithereens and I'm jonesing to read this one. I'd love to win!

Hi, What a lovely cover on this book. My husband informed me today that it is going to be a lean couple of months money wise. Please enter me in your drawing. I appreciate it! Cindi
jchoppes[at]hotmail[dot]com

I've always loved Sylvia's books because of the imagination and emotion used in stories. I can relate to the Dream Guardians totally because I do have a very active dream fantasy life.

I've been reading Sylvia's historicals and haven't had a chance to try her paranormal romances. So this would be a great opportunity!

I'm a huge Sylvia Day fan, too, and would love a chance to win some HEAT!

i hope it's not too late to enter the contest! reading is my passion :0

I would like to win a copy to read. Please enter me into the contest. Hope I'm not too late.

Oh I'd love to win this! Love her books. Definitely want to be in the contest. Thanks.

I would love to win a copy!!

Please enter me in the contest. Thanks.