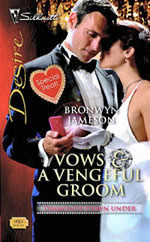 Give a hearty welcome to Bronwyn Jameson! She writes for Silhouette Desire and is the first author in the Diamonds Down Under mini series premiering this month in bookstores. Be sure to check it out! In the meantime, check out Bronwyn:

Vows & A Vengeful Groom is the first story in a brand new continuity series from Silhouette Desire titled Diamonds Down Under. This six-book series is set in Australia and New Zealand and focuses on a family split asunder thirty years ago over ownership of a fabulous diamond known as the Heart of the Outback. The old feud is reignited when a new generation is forced to deal with secrets and scandals unearthed in the aftermath of a tragic plane crash.

That crash provides the (shaky) foundation of Vows & A Vengeful Groom. The disappearance of her father brings estranged daughter Kimberley Blackstone back to the family home and business and into a new relationship with her ex, Ric Perrini. His ambition blew their brief stormy marriage apart ten years ago, but are his motives any purer this time around? Does he want Kim, the woman, or Kim, the Blackstone heiress who can help secure his position as chairman of Blackstone Diamonds?

What is the hardest part of writing?

The discipline of sitting down and getting the work done day after day. As much as I love writing and as involved as I get in my stories and characters, there are days I would rather be outdoors or reading a book or hitting the shops. Some days I have to prise the words from my brain one by one and on those days this is the hardest job I've ever done.

How do you stay motivated?

Having contracted delivery dates helps, and I have a posse of writing friends who can be relied upon for the swift-kick-of-motivation. But the true motivation has to come from inside, from the place where the stories are born and the characters gain life. The desire to tell their story is the only thing that works in the long term.

Which authors have influenced you over the years, whether for their writing or for their friendship?

Ooh, good question...but tough because there have been so many over the years. When I started writing romance (1995) it was the Australian authors who'd succeeded brilliantly at Mills & Boon. Emma Darcy and Helen Bianchin in particular, through the contests they sponsored at Romance Writers of Australia and the wonderful feedback they gave me. Also Alison Kelly, whose sale (to M&B) story inspired me at the start and whose unique, informal voice really appealed to me. Then there was Fiona Brand, who sold to Silhouette a year or two before me and opened the door there for future down-under authors to follow. On the writing side, the Desires by Caroline Cross, Barbara McCauley, Leanne Banks, Eileen Wilkes, Cindy Gerard -- I'm sure I'm forgetting others, but those are amongst the favourites whose writing and stories influenced and inspired me.

What's coming up next for you?

In April 08 I have Tycoon's One-Night Revenge, which is a spin-off book from my Princes of the Outback mini-series. The final book in that trilogy, The Ruthless Groom, left an unanswered question about Susannah, the runaway fiancée. It's been a long time coming and I hope the many readers who wrote and asked for this story haven't tired of waiting! I'm currently working on a new mini-series about Melbourne sisters and mistaken identity (right sister/wrong brother), which takes them on an interesting journey to England. There's polo and Bond Street shopping and a country house party and weekends in Paris and men who sp;eak in James Bond voices. I'm having a LOT of fun with this!


You can learn more by visiting Bronwyn Jameson's website!
at January 17, 2008

Bron I am very happy to hear that we are going to get another Prince of the Outback novel. Will be looking out for that one, as well as any others on there way.

Bronwyn, I think I'm upset. I've read a number of your beautiful novels and I'd have bet money you knock over a novel between tennis and evening drinks.

You make writing seem so natural and easy, which in truth is the measure of your dedication and skill. -- Looking forward to your next novel, thank you in advance. I know it will be magically wonderful. --- Eric

Bron, great to see you here! You're so right about discipline being the toughest part of this gig. I love the sound of the Diamonds Downunder series and I think Vows and a Vengeful Groom sounds like a ripsnorter of a launch story. And how excited am I that we're getting more Princes of the Outback? I adored those books - as did the RITA judges, as I recall ;-)

Bron, can't wait to read the Diamonds Down Under series. Your description of the first book hooked me right in. And I loved your Princes of the Outback books, too, so great news about a new one coming.

Hey, Caroline Cross is a fave of mine, too-- in fact I think you might have been the person who first mentioned her in my hearing, so thanks for that. A great recommendation.

Hi, Bronwyn! I just started Just a Taste and am loving it so far! I'm really enjoying the characters and their realness.

Yikes! So I have to track down the rest of the Princes of the Outback series and then wait until April for the wrap up!?? Eeee...

And I've read a couple of Caroline Cross's Men of Steele books--yummy!

Thanks for the great interview here! Off to go read some more!

Bronwyn, I so relate to the hard part being sitting down and doing it. And ultimately believing in your characters and needing to get their story out there.
Great interview.
Monya Mary

Sandie, so glad you haven't forgotten my Princes and that you're looking forward to Susannah's story. I'm also considering another revisit to the home of the Carlisles in a book for 09. Stay tuned! ;-)

Eric, you are such a funner! Of course I knock out a novel over pimms and lemonade between sets at the tennis!!

Oops, Eric, I also meant to thank you --and everyone -- for the lovely warm & fuzzy compliments on my books. I appreciate every one of them!

Hi, Anne. I DO remember pointing you in the direction of Caroline Cross. Very happy to have provided you with a new favourite, esp. when your books have given me such pleasure, so many smiles and tears.

Hi, Fichen. So glad you're enjoying Just A Taste. Good luck with catching up with my Pricnes of the Outback series -- hope you can find the 3 books!

Monya, thanks so much. I'm right now fighting the discipline thing. Need. To. Get. Away. From. Internet. And back to my current story and characters...