Spotlight Review on.... THE BILLIONAIRE WHO BOUGHT CHRISTMAS by Barbara Dunlop 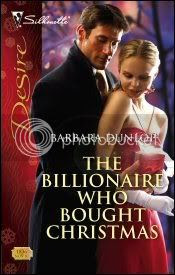 Billionaire Jack Osland has a plan to save the family fortune from another of his grandfather’s bimbo brides. He’ll charm the bimbo…er…lady himself and make her fall for him. When he meets the woman in question, just before she, he, and his cousin take off on a jet for California, Jack is curiously intrigued. Kristy Mahoney is blonde, beautiful and has a cute little dog in tow, reminiscent of Reese Witherspoon’s character in Legally Blonde. Jack’s plan works all too well: the plane has an “emergency” landing in Las Vegas where Jack and Kristy end up spending three days having fun and falling in love. Well, what’s a guy to do when in Vegas? Geting married comes to mind…

Kristy has no intentions of marrying Jack’s grandfather. Her intentions are to present her fashion design plans to the company board, hopefully kicking off her career. Jack is way too charming, but that doesn’t stop her from being attracted to him. When he proposes marriage, all seems right until the next day…when she learns the real reason he married her. She walks out of his life, hoping to never see Jack the jerk again, except in divorce court. Ah, but Grandfather Osland has a few tricks up his sleeve. Kristy is offered a chance she can’t refuse. She can prepare for a big fashion event at the family mansion in Vermont. The only problem is that Jack will be there. Poor Kristy, she’s caught between furthering her career or losing her chance, all because of Jack.

THE BILLIONAIRE WHO BOUGHT CHRISTMAS is a truly fun story. The chemistry between Jack and Kristy sizzles to the point readers might need to wear gloves while reading. Jack has already made up his mind about Kristy before she even steps onto the plane. Of course, one look at her only validates what he thinks of her. But even as he gets to know her in the days following while they’re “stranded” in Vegas, it’s soon apparent that even he is falling under her spell. Readers will know from the beginning that Jack’s beliefs about Kristy are erroneous, so when Jack’s ulterior motives are revealed, it makes for one of the best parts of THE BILLIONAIRE WHO BOUGHT CHRISTMAS.

Secondary characters of note include Jack’s cousin, Hunter, and Kristy’s sister, Sinclair. These two hit it off right from the first moment they meet. Well, Sinclair does want to smack Hunter, so I guess you’ll have figure out what “hit” means.
at November 18, 2007

This sounds like a good read! I have to admit the title intrigued me and made me want to know more. Gonna have to look for this one.