The Martini Dares....A Book Giveaway and a Perfect 10

- September 23, 2007
The first book in The Martini Dare series is My Secret Life and it was fabulous! I urge you to go and grab your copy before they're taken off the shelves to make room for October Blazes.

As a special treat, I have a signed copy of My Front Page Scandal by Carrie
Alexander which comes out in October. 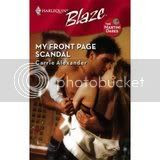 Yes, it's signed by the one and only Carrie Alexander.
Post away and I'll pick the winner Wed night and announce it here on the blog!

Meanwhile, enjoy this review of My Secret Life~!

Katie Winfield’s idea of a romantic relationship is to have sex unexpectedly and with little thought to the consequences. Her latest escapade at a masked costume party ends up with her seducing and having sex with a man she later discovers is her sister’s boyfriend. The sex was great and the guy is hot, but she’s mortified at her actions and resolves to think before she leaps. But then she hooks up with a social club called Martinis and Bikinis that issues dares to its members. Katie’s dare is to make love to the man of her dreams in a forbidden place.

Liam James grew up poor and has worked hard to get where he is -- a hotshot real estate developer. At the costume party, he is set to confront the father who’s never acknowledged him, but when he’s rejected, decides to console himself in a closet with the sexily dressed French maid who comes onto him. When he realizes the hot gal in the closet is his about-to-be-discarded girlfriend’s sister, Katie, then whoa...! Now he’s bent on pursuing Katie, and will go to any lengths to get her into his bed. Then he gets an invitation to meet Katie in a darkened theatre in the middle of the day. Are his forbidden fantasies about to come true?

Both Katie and Liam have emotional baggage that hinders their road to commitment. Katie recently lost her beloved mother and has thrown herself into some unpredictable predicaments. Her escapade with Liam in the closet has her feeling guilty for what she did to her sister, and she’s determined to not have sex on the spur of the moment. However, when she discovers Liam is now free and wants to pursue a relationship with her, what will Katie do?

Liam’s life has been driven by the knowledge that he is the illegitimate son of a rich and powerful politician. His ambition is to embarrass his father in public and force him to acknowledge him. So far, he’s not having any luck, but when he meets Katie, she provides a very nice bit of distraction. He’s not planning on marrying, so a short-term fling with her will fit the bill nicely.

Hot, sexy, fun, blistering, sizzling, fascinating, scorching…what more can I say about MY SECRET LIFE by Lori Wilde? Once you pick up this enjoyable tale, you won’t want to put it down. Though Katie’s almost slutty ways of picking up men might be off putting, you grasp right off she’s suffering from the loss of her mother. Readers will chuckle out loud realizing Katie doesn’t know she has the wrong man in the closet, and even more so when she discovers her mistake. Along the way, Katie and Liam get attached to an adorable dog, fall in love, and learn to put their past behind them. After this first tale in The Martini Dares series, I’m heartily awaiting the next story coming out in October.

A page-turner like MY SECRET LIFE well deserves the reward of a Perfect 10 from Romance Reviews Today. It has it all: love, realistic characters, an entertaining plot that keeps you chuckling and on your toes, an adorable dog, and of course, the most important -- a happily-ever-after. Run, do not walk, to the nearest book store and pick up your copy of MY SECRET LIFE.

Anonymous said…
Gosh Patti, am I the first to comment in the hopes of winning Carrie's book? Yup! Your review was well done.
11:58 PM

Anonymous said…
Hi Patti, I loved your review of My Secret Life. I used to subscribe to the Blaze's but several years ago I began to be disappointed in them and stopped my subscription. Reading your review makes me want to try them again.
3:31 AM

Tee said…
Patti I really enjoyed your reveiw of My Secret Life. Very nice! As for Carrie Alexander book, hope you pick me! LOL Have a wonderful Monday!

CrystalGB said…
Great review of My Secret Life.
8:42 AM

CrystalGB said…
This comment has been removed by the author.
8:43 AM

Laurie D. said…
Excellent review, Patti! Like Lisa, I dropped my Blaze subscription a few years ago - the last couple of years seem to have brought a turn around in story quality and I'm tempted to resubscribe! MY SECRET LIFE and MY FRONT PAGE SCANDAL both look especially good! Thanks!
10:45 AM

Unknown said…
this sounds very good Patti, i havent read alot of blazes but i am tempted to give some of them a try lately..
Jolene
12:25 PM

Jodi said…
Both of these books sound good. I think I'll have to start taking a look at the Blazes again!
11:49 PM

Nathalie said…
It is my first visit to this blog and wow... I am amazed! Thses reviews are great :)
3:15 PM

Laurie G said…
I enjoyed your review of Lori Wilde's book. Sister's boyfriend... at first made me hesitate as I had a sister 2 years older than me and I didn't want to have anything to do with her old boyfriends! Loved Lori's book "Licensed to Thrill".
I've read Carrie's "Slow Ride B".... would love to try her new one "My Front Page Scandal".
2:38 AM