- August 20, 2007
For Cathie aka Caffey, who asked me the other night about Julie Leto's books. 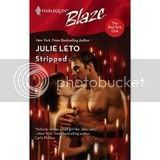 Lilith St. Lyon let herself get carried away in a brief affair with Chicago Detective Mac Mancusi. Lilith is a witch and can read minds. Well, she used her powers unethically to control their sex life, but Mac found out and dumped her. Lilith’s sister, Regina, is the Guardian of Witches and stripped Lilith of all her powers. However, now Mac is after Lilith for her help on a case. But what help can a witch be without her powers?

Mac is still reeling from the knowledge that Lilith reads minds and she used them to manipulate him in bed. However, he has a criminal they’re interrogating and hopes Lilith can read the bad guy’s mind. Unfortunately, she doesn’t have the power anymore but that doesn’t stop her from trying to help Mac on the case. As Lilith and Mac get deeper and deeper into the investigation, the sexual pull rises once again between them. Will they be able to stop the bad guys? And will Lilith get her powers back?

STRIPPED is a captivating tale from the first page, blending a Harlequin Blaze with a paranormal twist. Lilith is really a witch, but don’t expect a vanilla type witch in the mold of Samantha Stephens from the Bewitched television show. Lilith was bad in using her powers to get what she wanted, namely Mac, and didn’t expect the council to come down so hard on her. With Mac wanting her help, she feels helpless without her powers, but she will do whatever it takes to be a part of his life again. Mac, for his part, doesn’t truly understand what Lilith is, but there is something about her that he cannot resist. Mix in some hot sex scenes with suspense -- Mac and Lilith try to prevent a huge drug shipment from arriving in Chicago -- and readers are in for an edge of your seat read.

Even though STRIPPED is part of the Bad Girls Club series, this book is a standalone as there is only one scene which connects the three stories to each other. Minor characters include Mac’s fellow cop Rick Fernandez and Lilith’s best friend Josie Vargas. These two get involved as a couple in STRIPPED as part of a secondary plot. Readers will also get a brief glimpse of Lilith’s sister Regina, who has her own story out in September called WITCHY BUSINESS. Can’t wait to grab my copy of that!

Mix a little witchcraft with some scorching love scenes and you get a very enchanting tale that’s sure to end up on your keeper shelf. Grab your copy of STRIPPED.