A Perfect 10 ... TANGLED UP IN YOU by Rachel Gibson 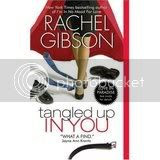 Two lives shaped by a murder years ago come together…

True crime writer Maddie Dupree arrives in Truly looking to probe into the double murder-suicide that involved a prominent married couple, Loch and Rose Hennessy, and a waitress, Alice Jones. Maddie has heard about the sexy appeal of the Hennessy men and meeting Mick Hennessy, she can see why. Mick is irresistible, but lets everyone know he isn’t looking for commitment. Maddie, for her part, can’t let an affair with Mick sidestep her investigation. Besides, there’s a little piece of information she hasn’t yet told Mick -- Maddie’s mother was the waitress Mick’s mother killed.

Mick grew up under the shadow of the murder-suicide scandal. Whatever drove his mother to murder his father and the waitress and then kill herself is anyone’s guess. He runs two of the town bars and keeps fairly busy. A little fling now and then provides for any needed sexual relief, and when he spies Maddie in his bar, he can tell right off that he doesn’t want to get involved with this smart mouthed, sexy lady. She’s trouble with a capital “T.” However, when Maddie starts asking too many questions about the past, he knows he’s going to have to deal with her. Well, what his brain tells him to do and what another part wants, that’s another thing. Like a train wreck waiting to happen, you know it’s all going to boil over when Mick learns the truth about Maddie.

What a fun read TANGLED UP IN YOU is! Maddie has grown from being a motherless little girl into a top selling author. The death of her mother has always haunted her, and she sees writing a book about it as a way to deal with the past. She’s well aware that she can’t get too close to the Hennessy family (Mick has a sister and nephew living in Truly also) but Mick is tempting. The confrontations Mick has with Maddie after he learns about the book she’s writing sizzles with high energy and sexual chemistry. Maddie, meanwhile, settles into Truly in a house she bought and gets to know the citizens up close and maybe a little too personal.
at August 06, 2007

sounds good, cant wait to read it either.