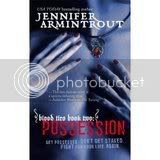 When Carrie hears the loud crash downstairs she expects many things...her boyfriend, Nathan, had an accident; a rogue vampire has broken in; the Movement which monitors and polices the behaviors of vampires has finally set an order of execution on her for not joining. She doesn't expect it to be the implosion of her life or a demonic possession.

When Nathan inextricably attacks her and can't control himself, Carrie is understandably disturbed, but more scared of what the Movement will do when they find out. It's not too long before the situation gets worse, because, of course, things like this just do. Soon, Carrie is dealing with a Werewolf assassin, a psychopathic vampire Oracle, and the discovery that her previous Sire has been brought back from the dead. It's times like this when a girl wishes she could go back to being a clueless human.

Another scintillating tale from the pen of Jennifer Armintrout, POSSESSION is a thrill ride from the first page. It literally starts with a bang and ends with a whimper, but it's the in-between that will leave readers reeling. The tale has humor, drama, romance, and adventure a-plenty for fans, but it's also got an edge that differentiates it from the genre. Although Carrie and Nathan are the main characters, this book is really made up of an ensemble cast that, together, make the plot work. Carrie, a new vampire in the scheme of things, is a complex character who makes real choices, good and bad, that we can all understand. Nathan is caught in a situation he can't control, but also one of his own making. Cyrus, Carrie's first Sire, is newly risen from the dead but has returned as a human instead of the vampire he's used to being. Max, a love-em-and-leave-em friend of Carrie and Nathan's, while somewhat of the comic relief of the tale, also grows as an individual when he butts up against an immovable force. A new addition to the crew is Bella, the Werewolf assassin, who learns that sometimes there is more to a situation than a black and white kill order from the Movement. Happy endings are rare in life where messy is the norm, and POSSESSION highlights this wonderfully.

Absolutely gripping, POSSESSION is hard to put down. Pick up your copy today and enjoy.