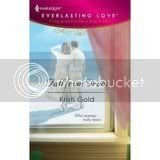 It was love at first sight. When Anne Cooper saw Jack Morgan across a crowded gathering, she just knew this man spelled big trouble. And when she learned he was a surgical resident at her father's hospital, she knew she would never give him the time of day.

Delia Cooper noticed that special light flicker and spark in her daughter's eyes at the same time Anne saw Jack Morgan, and she encouraged Anne to walk across the room and get acquainted. Too late, Anne tries to hide her interest in Jack and ignores her mother's prompting. Her heart might be pounding hard against her ribcage, but there is no way Anne will ever get involved with a doctor, of all people. A relationship with Jack is just a new excuse for the inevitable pain and heartache that follows while he climbs the ladder of success, leaving his heart's desire, namely her, behind in a lonely gloom.

Jack and Anne were meant for each other, but what should have been a fairy tale romance becomes a battle of wills every step of the way. They fall in love in an instant, but Anne spends too much time looking back instead of ahead to the future, even after their marriage. Cloaked in bitterness and resentment of her father's devotion to his own medical practice, Anne never really allows her love for Jack to grow. Driven by his career, Jack gives only what little time he can spare to Anne. He loves her and would never consciously hurt her, but putting his patients first causes tiny fissures that soon develop into deep chasms too wide to jump over. Now, over twenty years, one daughter, and a recent divorce later, Anne stands outside the ICU where Jack lies in a hospital bed, monitors beeping beside him. She remembers days past and ponders Jack's future. A stroke. Will he recover? Her heart bleeds for him, but turns to stone when their friend, Hank Steinberg, begs the impossible of Anne. Hank wants her to take Jack home, back to the house they once shared.

FALL FROM GRACE is the second lead title in Harlequin's new series romance imprint, Everlasting Love, that feature longer stories that take us through the first blush of new love to the trials, tribulations, and weathered storms in an enduring relationship of many years. Jack never wanted a divorce, but he goes along with Anne to make her happy. Now he feels less than half a man, unable to walk, to speak, or even read. How can he turn to Anne for help? She never really wanted him, so why would she be concerned about what happens in his future? At first, Anne refuses to allow Jack to move into her home. She's spent the better part of the last two years keeping him out of her life, but when daughter Katie (whose maturity exceeds her parents' in many ways) demands Anne allow Jack to come home, Anne relents.

FALL FROM GRACE is a powerful and emotional story and will keep you glued to the pages as we watch Jack deal with his feelings of ineptness after his stroke. Anne's refusal to admit her true feelings for Jack make for a tense atmosphere as she tries to help him through the recovery process. Several secondary characters help the story along. Anne's mother, Delia, tries to offer advice to Anne, but the catalyst in their relationship is their memories and Delia's new romance with prominent hospital attorney, Gabe. Add a couple of villains and you have a keeper of a story to cherish.

There's nothing that matches a good book and a warm fire on a cold winter's day, so be sure you don't miss this wonderful story!