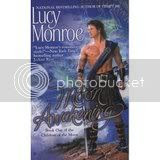 The Highlands of Scotland – Medieval Times

One of the Hamilton daughters is to wed a Highland laird, and when Emily overhears her father and step-mother agreeing to send Abigail, Emily intervenes. Abigail is deaf, and Emily fears the Highlander’s wrath when he realizes this, so she offers to marry him in Abigail’s stead. Her hopes that her new husband will eventually allow Abigail to live with them are dashed when she meets the Sinclair. The man obviously hates the English and has no wish to marry Emily at all. The only friend Emily meets at the holding is the laird’s sister, Caitriona. Shortly after Emily’s arrival, she and Cait are bathing at the lake when a group from another clan shows up and kidnaps them.

Lachlan is the laird of the Balmoral clan, and they are seeking revenge on the Sinclairs. One of the Balmoral women was abducted and mated to a Sinclair without the Balmorals' blessing, and clan law dictates that Lachlan retaliate. His plan had been to kidnap the laird’s pregnant sister and let the other woman go, but the Englishwoman insists that she is Sinclair’s bride and a better captive, so Lachlan takes them both. He has never before desired a woman as much as he does Emily, but he cannot keep her, for he is a Chrechte warrior -- a shape-changer -- and he must marry a Chrechte woman.

MOON AWAKENING is the fascinating first novel of a new series by Lucy Monroe. The Chrechte in Scotland are mostly werewolves, and both the Sinclair and Balmoral clans are ruled by them. Because a betrayal almost decimated the Chrechte, causing them to assimilate themselves into the clans, they are naturally wary of outsiders. But the Sinclairs have also suffered a personal betrayal from the previous laird’s English wife, so Emily is not in for an easy time of it. She and the Sinclair do not hit it off, and she fears that he will send her back to England, endangering her sister. Being captured by the Balmoral is almost a relief to her, but she knows she will have to return to the Sinclair. Yet, the more time she spends with Lachlan, the less she wants to leave him. The chemistry between them is immediate, hot, and much more than the virginal Emily ever imagined.

A secondary romance between Cait and Drustan, Lachlan’s second-in-command, is as tempting, and as troubled, as the one between Emily and Lachlan. Cait is the widow of an arranged marriage and is stunned by the feelings she has for Drustan. Another secondary character to note is the Sinclair. During his brief appearances, he isn’t the most likable person, but he’s not wholly dislikable either, making me wonder if readers will be treated to his story in the future.

An exciting tale, MOON AWAKENING is a book I highly recommend, and I can’t wait for the next story.