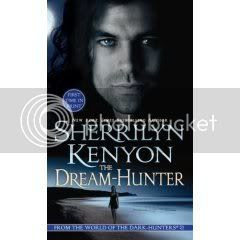 When Sherrilyn Kenyon introduced readers to the Dark Hunters, I’m sure she wasn’t expecting the frenzied feedback she's received. Readers immediately started asking her about Ash and other characters in the series. Wherever she goes to a book signing, Sherri gets a crowd that snakes out several yards. (Come on, RWA, give her a standalone table at the book signing in July!) If you haven’t read Sherrilyn Kenyon (or her alter ego, Kinley MacGregor) then you’re missing some fantastic reading.

I’m honored to have Sherrilyn Kenyon as my guest today. She has a new book out, called The Dream-Hunter. Enjoy!

1. Tell us a little about The Dream-Hunter.

In the ethereal world of dreams, there are champions who fight to protect the dreamer and there are demons who prey on them...

Arik is such a predator. Condemned by the gods to live eternity without emotions, Arik can only feel when he’s in the dreams of others. For thousands of years, he’s drifted through the human unconscious, searching for sensation. Now he’s finally found a dreamer whose vivid mind can fill his emptiness.

Dr. Megeara Kafieri watched her father ruin himself and his reputation as he searched to prove Atlantis was real. Her deathbed promise to him to salvage his reputation has now brought her to Greece where she intends to prove once and for all that the fabled island is right where her father said it was. But frustration and bad luck dog her every step. Especially the day they find a stranger floating in the sea. His is a face she’s seen many times.... in her dreams.

What she doesn’t know is that Arik holds more than the ancient secrets that can help her find the mythical isle of Atlantis. He has made a pact with the god Hades: In exchange for two weeks as a mortal man, he must return to Olympus with a human soul. Megeara’s soul.

With a secret society out to ruin her expedition, and mysterious accidents that keep threatening her life, Megeara refuses to quit. She knows she’s getting closer to Atlantis and as she does, she stumbles onto the truth of what Arik really is.

For Arik his quest is no longer simple. No human can know of a Dream-Hunter’s existence. His dream of being mortal has quickly turned into his own nightmare and the only way to save himself will be to sacrifice the very thing he wanted to be human for. The only question is, will he?


2. How do you stay motivated to write?

My hardest problem isn’t motivation, it’s getting others to leave me alone to work :) My kids and hubby won’t take no for an answer. I live to be at my keyboard and will get up early and stay up late for a chance to be in my zone. I think I’m addicted to it.


3. What is the hardest part of writing?

See the above. People tend to think because you’re working out of the house and you’re in your comfy clothes with no makeup that you’re not really “at work.” Or if I’m staring off into space, my hubby thinks it’s okay to bug me because “you’re not working, right?” Finding time away from distractions to connect with the characters is the hardest part of what I do. Although, over the years, I’ve gotten better about being able to jump right back in and to even write while watching the kids play sports. That one always cracks up my hubby who can’t figure out how I can type without mistakes and not look down. But when you’ve been doing this for 30+ years, you get a little used to where all the keys are.

The only thing worse than that is the physical pain that comes with the job. I have really bad carpal tunnel in my right wrist and a shoulder injury that pains me to no end when I type. Likewise, I have arthritis in one knee that will lock up from sitting too long. Those are never fun.

4. What inspired you to use mythology in the Dark Hunter series?

I’ve always used mythology in everything I do. I have nothing but the highest respect for the ancient writers, of all regions. The way their minds worked. The way they interpreted everything around them has always amazed me. I believe it was Newton who said “if I see further it’s because I’m standing on the shoulders of giants.” I’ve always loved taking their work and twisting it with mine.

In the case of the DH, I wanted to build my own original vampire legend and when I began seriously researching the myths of vampirism and shape-shifters, the oldest stories led back to ancient Greece. Since Apollo was the god of the sun and of plagues and curses, it was a natural tie-in. The rest, as they say, is history.

5. Can you tell readers what's in the crystal ball for Sherrilyn Kenyon and Kinley MacGregor as far as books coming out?

This year, we have several. Dream-Hunter just hit the stands and later this spring, the Dark-Hunter backlist is getting a face lift with all new covers that are incredible! They begin coming out in May and lead up to the release of the next Dark-Hunter novel, Devil May Cry which introduces a whole new breed of evil. Yeah, I had a blast writing that one. Then we have the Dark-Hunter companion that will be out in October. It’s the bible of the series and will contain all kinds of facts and tidbits about the series. Last on the Kenyon horizon for the year is Night of the Phantom which will be the last full length BAD novel. There will be one more short story with Joe and Tee. But NOTP is the last full length book for them–unless inspiration strikes.

For Kinley (it’s so weird talking about myself in the third person), the next up is The Warrior. Lochlan’s long awaited book from the MacAllisters and Brotherhood of the Sword series. It’ll answer a lot of questions for the series and will be out in October. And the Lords of Avalon comic books will begin this March–I’m so excited!!

Thanks for the interview, Sherri! You can learn more about Sherrilyn, Kinley and the Dark-Hunters by visiting their websites:

OMG, Patti, GREAT Valentines Day gift!!
Isn't Sherri just the sweetest writer in the world? Awesome interview, and I'm dying to lay my hand on one of those comics, not to mention some inside info on Ash's story....hint, hint, Sherri!!
And I can't wait for Joe and Tee's story...the anticipation has been building and building for that one.
And can't wait for Lochlan's story, either. How weird is it that one author can you have you hanging with baited breath in so many different story lines??? Her mind has to be a steel trap, and retain everything is all I can think of.

I read Dream-Hunter last week and loved it. Will there be more stories with the secondary characters from this one?