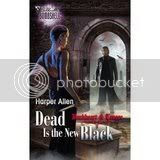 Living forever, never growing old, and being able to fly are just some of the things about being a vampire that Tashya Crosse is beginning to look forward to . . . until the hunger hits. Drinking blood from humans is just a little too gross for the spoiled shopaholic, so she starts looking for alternative methods and meets two very interesting people: Brooklyn Steinberg, a lesbian vampire; and the very sexy Lieutenant Heath Lockridge. Before Tash has a chance to do more than drool over the guy, her sisters show up and Heath is disappears. Considering the fact that Tash’s sister Meg is well known as the Daughter of Lilith (a hereditary vampire slayer) and her other sister Kat is equally well-known as a Healer (with the ability to restore vampires to their human form), Tashya should have been tipped off that Heath was a vamp. Learning that he is the second in command to Lady Jasmine Melrose, the Queen Vampyre who intends to take over Maplesburg, is just a bit disappointing -- he had potential. Add in the fact that prophecy proclaims the third Crosse triplet to be a Queen Vampyre herself, and Tash has found a powerful enemy.

Having always felt as if she lives in the shadow of her brainy and sexy sisters, Tash isn’t sure how they think she’ll be able to do anything to stop Lady Jasmine. However, with Brooklyn’s help, Tash starts to believe she can be more than she had ever expected. But will it be enough to save Maplesburg?

The final book in the Darkheart & Crosse trilogy, DEAD IS THE NEW BLACK focuses on Tashya and her struggle to accept that she is the child marked by the vampyre’s kiss. Like her sisters, up until a few months ago, she was a spoiled twenty-one year old woman who thought of nothing more than which designer accessories looked best with which designer clothes. Learning the truth about their parents' deaths and their own legacies changed the triplets -- a little bit. Tashya is not quite ready to give up her selfish ways, and the little inferiority complex she suffers where her sisters are concerned only gets worse when she learns that she is “doomed."

In addition to her encounter with the ultra-sexy Heath, Tashya has to deal with Dmitri Malkovich, a man who claims that Tashya is his fate. He is supposedly helping the triplets and their Grandfather Darkheart to research the disappearance of David Crosse, the girls’ father. Yet, Tashya’s new vamp powers are telling her that something else is going on with Dimitri, avowals of love not withstanding.

The riveting conclusion to the Darkheart & Crosse trilogy, don’t miss DEAD IS THE NEW BLACK.

January is the last month of publication for the Silhouette Bombshell line. So long to the kickbutt heroines and intricate plots.
To help say goodbye, I am giving away the three books in the Darkheart & Crosse series by Harper Allen. (This is book #3.) Just post a comment and I'll put your name in the hat for the book, the winner to be drawn late Friday night.
at January 15, 2007

I've loved The Bombshells and am relly sad to see them go
:(

It is too bad about the Bombshells. They had some very talented authors writing for them.

I hate to see the Bombshell line end. I love the kick butt heroines.

Loved the books! Hate to see them end.

This book sounds awesome, and I SO hate to see the Bombshell line end. Seems like HQ has been doing alot of shaking up with their lines lately, and I'm not real pleased with some of the things they're changing. Getting rid of the Bombshell, taking SIM's down to 4 a month, getting rid of Temptations...I've discovered some of the greatest authors, and story lines in these series, and it breaks my heart to see them go!!

That is too bad. Will definitely miss this line. Loved them.

I hate to see the end of this line. It seems that just as you find something that you really like, they change it or do away with it. I am really not happy with changes that Harlequin has been making, this being one of them. Also I have been an Intimate Moments subscriber for years, and taking them down to 4 a month is really rubbing me the wrong way. And being told by them we will love the changes is really a bunch of hogwash.

Will miss these books. That is a shame.

bombshells will be missed since they were unique.

Too bad since I felt that they were an interesting line.

This book sounds great! I can't wait to read the trilogy! The Silhouette Bombshell line will be missed. I'm still mourning Harlequin Temptation.

I always looked forward to reading the bombshell line with their variety of authors and books. It was uplifting and fun. Women with a mission always interested me greatly and will be sorely missed.

I am going to miss these! Just got into these bombshells and now gone.
I hope for you Harper that you can continue these in another line? :)
I'd love to be in contest!

Too bad Bombshell's are ending! This book sounds great!