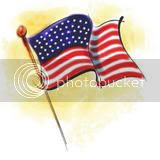 Happy Veteran’s Day from Romance Reviews Today and RRTErotic!
We all have been touched by a military veteran at one point in our lives. It could be you, a family member, friend, neighbor, coworker, or anyone out there.

Here’s a little history of how Veteran’s Day came to be known as it is today:*

Veterans Day, formerly known as Armistice Day, was originally set as a U.S. legal holiday to honor the end of World War I, which officially took place on November 11, 1918. In legislature that was passed in 1938, November 11 was "dedicated to the cause of world peace and to be hereafter celebrated and known as 'Armistice Day.'" As such, this new legal holiday honored World War I veterans.

In 1954, after having been through both World War II and the Korean War, the 83rd U.S. Congress -- at the urging of the veterans service organizations -- amended the Act of 1938 by striking out the word "Armistice" and inserting the word "Veterans." With the approval of this legislation on June 1, 1954, Nov. 11 became a day to honor American veterans of all wars.

In 1968, the Uniforms Holiday Bill ensured three-day weekends for federal employees by celebrating four national holidays on Mondays: Washington's Birthday, Memorial Day, Veterans Day, and Columbus Day. Under this bill, Veterans Day was moved to the last Monday of October. Many states did not agree with this decision and continued to celebrate the holiday on its original date. The first Veterans Day under the new law was observed with much confusion on Oct. 25, 1971.

Finally on September 20, 1975, President Gerald R. Ford signed a law which returned the annual observance of Veterans Day to its original date of Nov. 11, beginning in 1978. Since then, the Veterans Day holiday has been observed on Nov. 11.

Finally…to help celebrate the holiday weekend, it’s time for a book giveaway. One winner will get her or his choice of one book.

Here is the list of books you get to choose from:

MY BIG FAT SUPERNATURAL WEDDING anthology by various authors including Sherrilyn Kenyon and Charlaine Harris
ASKING FOR TROUBLE by Leslie Kelly
WHISPER OF WANTING by Jamie Sobrato
SANTA, BABY anthology by Jennifer Crusie, Lori Foster and Carly Phillips
I’LL BE SEEING U by Dianne Castell
THE BAREFOOT PRINCESS by Christina Dodd
THE MARRIAGE TRAP by Elizabeth Thornton
NOTHING TO FEAR by Karen Rose
THE KEPT WOMAN by Susan Donovan
FIRST LOVE by Julie Kenner
BAD BOYS IN BLACK TIE by Lori Foster, Erin McCarthy and Morgan Leigh
SIZE 12 IS NOT FAT by Meg Cabot
SECRETS VOL 15 by various authors

How do you get entered? Just post a comment here on this post. Do you know a veteran? Do you see a book you can’t wait to get your hands on? Post a comment and be entered in Romance Reviews Today’s book giveaway!

Contest winner will be announced Monday morning!
at November 10, 2006

We plan on going to a local Veteran's Day parade (in the snow and sleet.. maybe!). My Grandpa was a Navy man... left his wife and 3 kids (at the time.. later there were 6 of them) to ship out in WW2. We lost Grandpa 9 years ago and I miss him so much..

Veteran's Day will always hold a special place in my familys hearts. God Bless all our Service people!! Jenni K. (hunsmom@insightbb.com) P.S. Would LOVE to have Santa Baby!!!!!!

OK, this is my 2nd attempt.. now watch both of these come through...

My Grandpa was a Navy man.. served in WW2... so Veteran's Day is very important to my family. We'll probably go to a local parade to cheer on the service people.. God Bless them all!!! Jenni K. (insightbb.com) P.S. I would LOVE to have Santa Baby!!

My youngest son is in third grade and they have been talking about Veteran's Day at school. Last Tuesday I found him at the computer writing and he said he was writing about veterans. This is what he had on the screen:

Veerans are people who fight for us in the army, marines, navy and the air force. We are so happy that some people have come back alive. We're sad because some people died.

We support these heroes with a special day called Veteran's Day. We have this day because we love our veterans. Veterans are very brave and very smart. They have to know how to shoot a gun and drive a tank.

I am a kid. I'm nine years old. My school is called Porter Elementary. My assistant principal fought in the army and is still alive. That makes her a veteran. My papa was one, too. I love both of them.

my dad fought in WWII, he doesn't talk about it much until recently. People have lost sight of what this day is about.

my dad fought in WWII, he doesn't talk about it much until recently. People have lost sight of what this day is about.

My family has always had someone on the Armed forces. My dad's uncle was on WW1 & WW2, Vietnam, Korea. He passed away 10 years ago but I remember as a little girl sitting on his lap listening to his stories. My cousin's husband just retired from the Army a year ago and he is the sweetest husband and father. I'm glad we take at least a day to honor these brave men & women that fight for our freedom and our country, they deserve it!

My father is a WWII veteran. He is 84 and does tell us some stories but for the most part says little. I can only imagine the things they saw and had to do.

All the people that have fought and are still fighting for our freedoms need to be honored and I am glad that we have Rememberance/Veterans Day where we take the time to honor them.

I would like Santa Baby or Bad Boys In Black Tie if I should be drawn.

My great uncle was a veteran...he passed away several years ago though and I never really heard him talk about the war. My great aunt did tell us that he was present at the Normandy invasion (D-Day).

I am glad we have a day to honor these heroes. They deserve it!

Not only is my husband, Uncles are Veterans, so was my Dad.

I am so glad we have this day to thank them for what they do for our country.

God Bless America and Our Military!
My husband currently serves in the Navy Reserves. My sister is also in the Navy. She will retire in 3 years. I have a brother-in-law in the Air Force, and has served in Iraq. Several cousins have also been in the military and been overseas.
Both of my grandpas were in WWII. Like most others, they have said very little.

My husband served right after Vietnam and our flag has been flying for two days since I incorrectly told him that yesterday was Veteran's Day.

i do but don't not anyone in my immedaite family, and i pray for all them and make a safe trip home.

i would whisper of wanting by jamie sobrato, because i love blaze books

My father was a Korean War veteran~~a purple heart recipient. I have lived my whole life next to Ft. Knox, and have always had friends and been friends with those whose family members are always putting themselves at risk so that we may enjoy our freedom. It's something I have never and can't imagine I will ever take for granted. In times like now the sacrifices are close to home, and I'm reminded every day to thank a vet, and to never underestimate what they and their families are willing to give up for us to live in the America we know.

I see alot of books on this list that I really want so bad *G*
Alot of good looking books to choose from wow.

My grandfather was in WWII. My neighbor is also a veteran.

My dad was in the Army before he married my mom, but he never served overseas. Now I see friends of mine whose sons are being called to serve. It's a sobering thought. God bless them all.