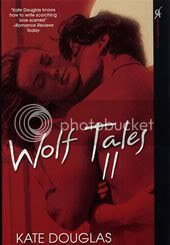 Even before I got to know Kate Douglas,I'd heard good things about her and her stories. She might be a grandmother, but she writes some of the hottest stories out there. She started out published in ebooks, then onto print publishing. She is now one of the busiest authors out there. But she's also one of the nicest. Sit back and get to know Kate.

1. Tell us about yourself.


Wow...that’s a wide open question! Sometimes I feel like the “old broad” among authors of erotic romance. I’ve been writing professionally since 1971 when I wrote copy for a small country western radio station in Turlock, California...since then I’ve been a newspaper reporter, cartoonist, author of numerous fiction and non-fiction pieces and a romance author since my first sale to an epub in 1998. I’ve been married to the same wonderful guy for 35 years and we’ve got two grown kids, a son and a daughter, who are married and parents themselves. Doug and I are remodeling a house in the mountains in northern California where we’ll retire...or HE will retire...I doubt I’ll ever stop writing! The short version? I’m a mom, a grandmother, a wife, a friend, but most of all I am a writer, and that is how I will always define myself.

2. What is the title of your latest release and what’s it about?


I’m really excited about my next book coming out in January, Wolf Tales III. It’s actually the fifth story in my Wolf Tales series, following Wolf Tales, Chanku Rising in Sexy Beast, Wolf Tales II, and Camille’s Dawn in the Wild Nights anthology. If you watch LOST and love Sawyer, the quintessential bad boy, that’s my hero in Wolf Tales III—Jacob Trent is the original bad boy and he is SO damned sexy! His eyes twinkle just like Sawyer’s!

3. How do you come up with ideas for your stories?


LOL...I wish I knew. I can tell you they all start with the character, but sometimes I haven’t got a clue what’s going to happen when I sit down to write my stories. Right now I’m writing Wolf Tales V and it’s already going places I hadn’t imagined. This one is a reverse on the “Beauty and the Beast” story—the heroine is hideous. She’s been caught half way between the shift from woman to wolf since she was twelve years old, so she’s half human, half wolf. Baylor Quinn, who you’ll meet in Wolf Tales III, is on his way to upstate New York to help her find the way to her true heritage as a shapeshifter.

4. What’s the most interesting thing about you that very few people know?


Hard to say, as my life is an open book. I have NO secrets! Maybe the fact that every morning I catch a frog in my CD cabinet and take him outside, and every night he’s back...and I let him stay because we live in the mountains and it’s cold outside! I’ve been doing this since last July...

5. What’s coming up in the near future for you?


This is going to be a really busy year—we’re getting set to build a garage on our house, my husband is getting ready to retire, I’ve got four more stories (two novels and two novellas) to write for Kensington, the PASIC conference in New York in March, the RT conference in Houston in April, the Romance Writers of America conference in Dallas in July, and a new grandson to spoil and so much on my “to do” list I’m ready to go nuts! On top of that, we’re finally moving out of our house in one county and into our house in the mountains and I never knew how much junk I had until it was time to put it all in boxes...my near future is a headache just waiting to happen! And during all of that, I’ll be writing...

Thank you, Kate! It was a pleasure to have you. Read Romance Reviews Today review of WOLF TALES II here.

Be sure to visit Kate at her website at www.katedouglas.com and get ready for WOLF TALES III coming out in January!
at November 13, 2006