Note: book giveaway winner notice is down below, or click here. 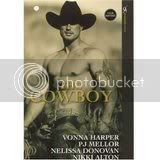 Today we have the pleasure of chatting with Genie Davis, also known as Nikki Alton. Yes, she has a double life as a writer of everything, as you’ll see below. Don’t forget to check out RRTErotic’s review of THE COWBOY.


1. Tell us about yourself

In film, I've written everything from supernatural
thriller to romantic drama, family, teen, and comedy.
I'm a member of the Writer's Guild of America, and
I've written on staff for ABC-TV's Port Charles;
written, produced, and directed reality programming
and documentaries for The Learning Channel, PBS, and
HGTV, and a lot of television commercials and
corporate videos. I've had one feature film script
make it from option to production - Losing Hope was
produced by Epic Films in 2001. Although it's a dark
comedy, the real category for this project would be
'obscure.'

2. What is the title of your latest release and
what is it about?

Five O'Clock Shadow, a romantic suspense/contemporary
is coming out February 2007 to a book store near you!

In short, this light hearted but suspenseful book
concerns Jessie Adams, indie-rock DJ, part-time
musician, and full-time fool for long haired rockers
who makes a run for local political office to help
save her best friend's music club, and finds danger in
a stranger's threats and an intense affair with Chuck,
a cop with his own cause. As Jessie puts it, when your
life depends on surviving both love and a political
campaign, winning is only half the battle.

3. What inspired you to write?

I think honestly that I love to talk so much if I
didn't write all my stories DOWN everyone would give
up on listening to me.

4. What do you do for fun in your spare time?
Take road trips with my kids all around the West, the
more obscure the destination the better; watch my cats
destroy the furniture; force my husband to watch films
with subtitles, and torture him into watching Lost.
I'm also big on going to the beach - while my kids
surf, I read. And then there's those great espresso
and chocolate ice cream shakes at a little place a few
feet from the sand. Which brings to mind my other main
activity: the treadmill.

5. What's coming up in the near future for you?

Thank you for chatting with us! 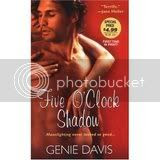 WoW this was a wonderful ask five with Genie. I enjoyed reading it :)
Thanks Genie for being here. WoW you sure do alot huh *G* :-)
Five O'Clock Shadow sounds great love the cover.

Have A Happy Thanksgiving Everyone
Gobble Gobble.

hi linda you too.

Nearly fell over when you mentioned The Fiction Works!

I have a contemporary romance there, too. Around the same time. Like An Angel. It's still available as an e-book from Fictionwise.

I'm late with my comments, but had to add some anyway!

Looking forward to reading The Cowboy! and Five o'clock Shawdows on my list to buy.

Great interview, Genie! Hope you had a great Thanksgiving!
Pauline