Promo: Anyone But Rich by Penelope Bloom 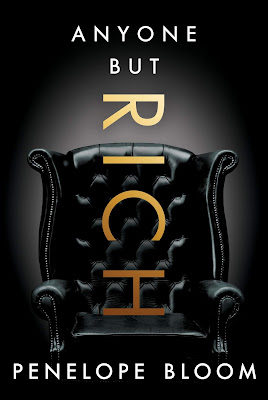 Anyone But Rich is the first book of my new, three book "Anyone But..." series. Every book is a true romantic comedy and is full of moments that I hope will have you laughing out loud, if not at least breathing out a little puff of air from your nose.

Anyone But Rich follows the oldest King brother, Richard King, and his love interest, Kira Summerland. Seven years ago, the King brothers left behind a trail of scorched earth as far as Kira and her best friends, Iris and Miranda were concerned. The three women swore an oath that they’d never date the King brothers again, even if they wound up becoming mega-famous billionaires and came back on their knees, begging for forgiveness.

But that’s exactly what happened. Now, Kira isn’t so sure she’ll be able to hold herself to a vow she made seven years ago, even if breaking it could drive a rift between her and her best friends.

Rich and the King brothers are global phenomenons. Each of them takes their own, unique approach to melting hearts. Rich is the kind of guy who puts business first and relentlessly pursues his goals, even if it means ruffling feathers along the way. That’s what makes Kira so special for him. She’s the one person who can bring out a softer side of Rich, and at times, even a funny side. But Kira or not, he’s generally seen as the face of the company, and he’s easily the biggest name to ever land in a place like West Valley.

Cade is Rich’s twin brother, but the two men couldn’t be more different. Cade is a somewhat strange blend of intelligence, goofiness, and unbearable cockiness. He can turn any situation into a joke, but behind the laughs and crude comments, he still wonders if his high school crush, Iris, would ever look beyond their past.

Nick is the youngest of the trio and generally thought of as the quiet genius of the group. He’s not as in-your-face as Rich can appear, but Nick commands respect in his own way. He also has the closest relationship with Cade, partly because Nick is the only one who ever seemed up to the task of keeping his wild, older brother alive.

All in all, the three brothers are like the riders of the apocalypse, if apocalypses were caused by melted panties and broken hearts, at least.

But the King brothers all share one thing in common. Whether they’ll ever admit it or not, they all came back to West Valley for the girls they left behind. Anyone But Rich is the story of Richard King and his attempts to win the forgiveness of Kira Summerland, his old high school flame. The question for Rich is how long he can pretend forgiveness is all he wants. For Kira, it’s a question of whether she can look past the mountain’s worth of warning signs telling her to stay as far away from Rich as possible.

Anyone But Him Excerpt

He was shorter than most of the freshmen, but the shiny patch of bald skin on his crown and the drooping bags under his eyes meant there was no mistaking him for a student. “Just wanted to say good luck on your first day, Kira.”

“Thank you,” I said. I hoped my smile looked genuine. I’d expected to need to try very hard to make a good impression on my new boss, but from the first day of preplanning two weeks ago, it seemed like he was the one sucking up. It wasn’t the first time being the mayor’s daughter had given me some unwanted advantage. No matter how much I protested, some people in West Valley were dead set on the idea that getting in my good graces was the same as getting in my father’s good graces. Unfortunately, my objections went unnoticed, and people had never been quick to believe that favoritism wasn’t something I secretly encouraged.

So I did what I always did. I pretended I still needed to bust my ass to make a good impression. I refused to sit back and let my father be an easy pass, and I hoped for the best.

“Is everything okay?” I asked when he was still standing there with a smile plastered on his face. From the corner of my eye, I saw students start pouring into my room from the back door.

“There is just one thing. A slight hiccup, really. Nothing that you would need to worry your father about,” he said. “There’s a very influential businessman in town. He got on the phone with the right people a few minutes ago, made some very interesting promises, and . . . well . . .”

“Well, what?” My eyes were darting between Principal Lockett and my rapidly filling classroom.

“He’s apparently an old friend of yours. Said he’d like to be able to stop by today and say hello. He promised it would be quick.”

“It’s my first day,” I said slowly, hoping I wouldn’t need to explain any further.

“And you’ll do great!” Principal Lockett seemed to sense my inevitable eruption, so he ducked back into the hallway and flashed me a quick thumbs-up before the door snicked closed.

I turned my eyes toward my students and made a weak attempt to mentally rally. I can do this. They’re just children in bodies that have grown faster than their brains. They aren’t as mature as they look.

“Do you see how red her face is?” whispered a girl in the front row. I wasn’t sure if it was intentional, but I was pretty sure I would’ve been able to make out every word of the “whisper” from the parking lot.

The boy beside her smiled cruelly. “Maybe she’s PMSing.”

The girl frowned at him and slapped his arm. “That’s not how it works, you idiot.”

“What do you mean? There’s all the blood issues. Some of it must end up in their heads.”

The girl rolled her eyes, crossed her arms, and gave up on him.

I cleared my throat. “I’m Miss Summerland.” I paused, swallowed, and willed my windpipe to grow a little bigger. “This is—”

The bell signaling the start of first period rang deafeningly, cutting me off and making me realize I was already showing what a rookie I was.

I cleared my throat again. “This is—”

The announcements began, instructing the students to stand for the Pledge and the anthem.

I turned my back to face the flag and pretended I didn’t hear the snickering students behind me. I also pretended I didn’t remember being a high schooler not so long ago, and how quickly I would’ve decided a teacher like me was the kind students were going to eat for breakfast.

A few minutes later, the announcements ended, and I finally turned to face the students again. “Okay. This is—”

The door to my room opened. I spun, hands balled into fists. All the frustration of the last few minutes boiled over into an embarrassingly squeaky outburst. “I would love to finish my sentence!”

And that was when I saw my visitor.

Distantly, I heard the excited whispers of every girl in my classroom.

“This is going on my Snapchat!”

Their voices faded into background noise as I looked at him in person for the first time in so many years.

“Please,” he said. His voice was so deep and rich I could feel it rumble through my chest. “Finish your sentence. I’ll wait.”

He knew damn well there was no way I could think about anything else with him standing there. The corner of his mouth had twitched up into the suggestion of a smirk, and his eyes were locked predatorily on me. He knew exactly what was happening to me, and he was enjoying it.

I tried to picture a normal human being in his place. I tried and failed to unsee the broad, powerful shoulders and long legs, to unmake every cruel and perfect line of his face, from the sharp jaw to the dark eyebrows and burning green eyes. His nearly black hair was cut short and neat. He wore a suit that would’ve made most men look overdressed, but he seemed perfectly at ease. Here I was with my legs spread out like I was trying not to step in a puddle, pretending I was in control. Meanwhile, Rich’s pinkie toe projected more confidence than my entire body.

I wanted him and his obnoxiously cocky pinkie toe out of my classroom and out of my life. I was perfectly happy seeing him in a dirty dream every few weeks, where he couldn’t screw up my reality any more, thank you very much.

The students acted like his sitcom laugh track, and I already wanted to give them all detentions for being traitors.

I turned, annoyed, and gestured to my students. “This is English Four Honors.” I looked back at Richard. “Out.”

Seven years ago, my best friends and I made a promise: No matter what, we would never date one of the King brothers. Even if they grew up to become megafamous, gorgeous, heart-stopping billionaires. Even if they crawled on their knees and begged for forgiveness.

But guess who just flew back into our lives in a private jet? And guess who just showed up to my job on my first day? Richard. King. Fortunately, it takes two seconds for Richard to reveal he hasn’t changed. Conceited. Cocky. Rude. Unfortunately, he’s also the kind of gorgeous that’s borderline offensive—with a jawline to make statues self-conscious and a grin that short-circuits my brain.

Penelope Bloom is a USA Today, Amazon, and Washington Post bestselling author whose books have been translated into seven languages. Her popular romances include His Banana, Her Cherry, Savage, and Punished.

Her writing career started when she left her job as a high school teacher to pursue her dream. She loves taking her imagination for a spin and writing romances she’d want to live. She likes a man with a mind as dirty as sin and a heart of gold he keeps hidden away. Her favorite things include getting to wear socks all day—pants optional—and being a positive example for her girls. Showing her daughters that no dream is too big, no matter what anyone tells them, is worth all the late nights, doubts, and fears that come with being a writer.

a Rafflecopter giveaway
at September 04, 2019