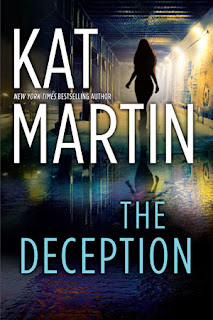 When it comes to Romantic Suspense, one of the most import and often the hardest thing to do is to find the right match for the hero or heroine who is the primary character in the book.  In THE DECEPTION, Hawk Maddox is a former Marine, a strong, tough, sometimes reckless, chance-taker.  I needed a woman who was equally strong, tough-yet-feminine woman who could handle his reckless nature.

And because Hawk was an extremely virile male, a passionate woman, as well.

Kate Gallagher was all of those things.  She also strongly believes in justice, which means finding the killer who murdered her sister takes precedence over a relationship with Hawk.
As the two are thrown together in their search for a killer, Hawk and Kate begin to appreciate the strengths they find in each other.

And there is the sexuality that vibrates between them. Though Hawk wants Kate from the moment he spots her on the dance floor of the Sagebrush Saloon, he understands her grief and her resolve.  Though the time isn’t right, Hawk comes to believe Kate Gallagher is a woman worth waiting for.

Working to make them a couple was fun, and of course sending them on a dangerous, desperate adventure added to the excitement of writing the book.
I hope you’ll look for THE DECEPTION, and if you haven’t read Chase Garrett’s story, THE CONSPIRACY, I hope you’ll give it a try.

Until next time, all best and happy reading.  Kat

In my latest Romantic Thriller, THE DECEPTION, book two of the Maximum Security series, Kate Gallagher is devastated when she learns her sister has been murdered.  Determined to find Chrissy’s killer, Kate hires lethal bounty hunter, Hawk Maddox.  Working together, they follow a trail of clues that lead them deep into the city’s underbelly.  Though Hawk warns Kate of the danger, nothing he says can convince Kate to walk away.

THE DECEPTION, by Kat Martin
Excerpt 1 of 5
Dallas, Texas
“I’m sorry, Ms. Gallagher.  I know this is terribly painful, but unless there’s someone else who can make a positive identification--“
Kate shook her head.  “No.  There’s no one else.”
“All right then, if you will please follow me.”  The medical examiner, Dr. Jerome Maxwell, a man in his fifties with thick black hair threaded with gray, started down the hall, but Kate stopped him with a hand on his arm.
“Are you...are you completely sure it’s my sister?  The victim is definitely Christina Gallagher?”
“There was a fingerprint match to your missing sister.  I’m sorry.  We’ll still need your confirmation.”
Kate’s stomach rolled.  Her hand trembled as she followed the doctor down a narrow, endless hallway in the Dallas County morgue.  The echo of her high heels on the stark gray linoleum sent a sweep of nausea through her.
The doctor paused outside a half glass door.  “I warn you, this is going to be difficult.  Are you sure there isn’t someone you can call, someone else who could make the identification?”
Kate’s throat tightened.  “My father’s remarried and living in New York.  He hasn’t seen Chrissy in years.”
“And your mother?” the doctor asked kindly.
“She died of a heart attack a year after Chrissy ran away.”  For Madeleine Gallagher, losing both her husband and her daughter had simply been too much.
The doctor straightened his square black glasses.  “Are you ready?”
“I’ll never be ready to see my sister’s murdered body, Dr. Maxwell.  But I’m all Chrissy has, so let’s get it over with.”
The doctor opened the door and they walked out of a hallway that seemed overly warm into a room that was icy cold.  A shiver rushed over Kate’s skin and her heart beat faster.  As Dr. Maxwell moved toward a rollout table in front of a wall of cold-storage boxes, Kate could see the outline of a body beneath the stark white sheet.
Emotion tightened her chest.  This was her baby sister, only sixteen the last time Kate had seen her two years ago, before she had run away.
The doctor nodded to a female assistant in a white lab coat standing next to the table, and the woman pulled back the sheet.
“Dear God.”  The bile rose in Kate’s throat.  She swayed and the doctor caught her arm to steady her.
“Is this your sister, Christina Gallagher?”
Tears welled and slipped down her cheeks.  “It’s...it’s her.”
“I’m sorry for your loss,” the doctor said.
“Thank...thank you.”  Tears blurred her vision and her head swam as she walked out of the building into the sunlight and crossed the parking lot to her car.  She wouldn’t be returning to her office today.  She needed time to grieve.
Kate slid in behind the wheel and shoved her key into the ignition.  Fresh pain struck so hard she couldn’t breathe.  Instead of starting the engine, Kate put her head down on the steering wheel and started to weep.

Jason Hawkins Maddox sat at the old fashioned long bar in the Sagebrush Saloon, a country western hangout with a juke box in the corner for dancing.  Tonight he was there on business, meeting an informant he hoped would give him a lead on the fugitive he was hunting, Randall Darren Harding.
Harding, a cement contractor, had been arrested for the brutal murder of his ex-girlfriend.  He’d been out on bail when he’d decided to flee instead of standing trial, where most likely he would have been convicted.
From what Jase could find out, Harding was a rotten, self-centered, mean-tempered bastard, the kind who could wind up killing again.  He’d strangled his girlfriend in a fit of rage, but a fancy lawyer had gotten him out on bail.
The reward for catching him was a fat fifteen percent of his million and a half dollar bond.  Jase planned to collect.
Thus his meeting with Tommy Dieter at the Sagebrush Saloon.
It was relatively early, a little after nine p.m., but the place was already more than half full.  The décor was rustic, with a sea of wooden tables.  A big dance floor dominated the interior, the juke belting Willie Nelson for the couples that were
In the mirror in the carved oak back bar across from him, he could see himself on a bar stool next to a little guy in a blue Texas Rangers baseball cap.  The little guy made Jase look even bigger than his six-foot four-inch, two hundred twenty pound frame.
So far Tommy hadn’t showed, but he wasn’t due for at least another hour.  In the meantime, Jase was enjoying the local scenery, his attention fixed on the tall blonde with the pretty face, sexy curves, and amazing cleavage, but then half the guys in the bar were watching her.
In a short jeans skirt, a pair of cowboy boots, and a bright pink tank top, she had danced five times in a row.  If he weren’t there on business, he might ask her for a turn around the floor himself.  Jase watched the blonde dancing with a lanky biker too short for her, too skinny, and a few years too young.
She wasn’t meant for the boy biker, but she was just Jase’s type, luscious, with legs that went on forever.  And as she slid her arms around the boy biker’s neck and he pulled her close, clearly uninhibited.  It didn’t take much to imagine the way she’d feel moving beneath him.
He picked up his beer and took a drink.  He’d been watching her all evening.  The good news was, she’d been watching him, too.
When the song came to an end, she left the boy biker and walked right up to him, the heels on her boots pushing her closer to his height.
She smiled.  “You like to dance, cowboy?”
“Depends.”
“On what?  The song?”
“Who I’m dancing with.”
A dark blond eyebrow went up.  “Is that right...”
“That’s right, darlin’, and you’ll do just fine.”  Without waiting for a reply, Jase swept her onto the dance floor.  She felt good in his arms, fit him just right.  She was a good dancer, but so was he.  He was a Texan.  He’d done all the usual things a Texas boy did.  Played football, drank beer down on the river, rode horses, and two-stepped.
“What’s your name?” he asked as he whirled her around the floor
“Kate.”  She smiled.  “You’re Hawk.”  Her smile widened into a grin that etched a dimple into her cheek and he felt a jolt of heat.  “I like it,”  she said.  “It’s sexy.”
“You think so?”  As the song came to an end, he drew her off the dance floor into the shadows, took a chance she wouldn’t slap his face, and kissed her.
She softened against him and kissed him back, and he took it a little deeper, felt the rush hit his system.  Since they were standing in a bar full of people, he didn’t let it go too far.
Kate ran a finger along his jaw.  “You looked like you’d be a good kisser and you are,” she said.
“We can go outside and I’ll show you just how good I can be, but it’s gotta be up to you.”
Something flickered in her big brown eyes and for a moment her bright smile faded.  “I need that tonight.  Just this once, just to help me forget.”  Her bottom lip trembled an instant before her saucy grin returned.  “Come on, cowboy, let’s go.”