Book Giveaway: The Duchess in his Bed by Lorraine Heath 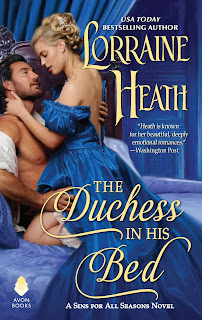 THE DUCHESS IN HIS BED – Lorraine HeathA Sins for All Seasons Novel, # 4Avon BooksISBN: 978-0-06-267606-1September, 2019Historical Romance Paperback (Also in Hardcover in August)London, 1840 and 1872
In a short prologue we meet a scoundrel who inherited an earldom thanks to his older brother’s “hunting accident”. He fathers a series of bastards whom he palms off on needy women. Some of them survive. Several lucky ones were raised by a good woman named Ettie Trewlove. One such, Aiden Trewlove, has built himself successful businesses, a men’s club and a very popular club catering to women who enjoy gambling, smoking, and being catered to by young handsome men. Though flirting is rampant, it falls short of being a brothel. Aiden welcomes the ladies with a smile, but goes no further. Then temptation arrives all dressed in blue, including her mask.Serena Sheffield, Duchess of Lushing, suddenly loses her dear husband to an illness. What is worse is that she never gave him children, so no heir. In THE DUCHESS IN HIS BED, Ms. Heath does a great job of bringing to life not only Serena and Aiden, but their families and friends. Readers of the first books will already know the Trewloves.


Serena has three younger sisters and a brother dependent on her. But much of the Lushing fortune will revert to the crown for lack of a male heir. What will she do? Then her brother suggests a plan.While the whole plot is captivating, it’s also filled with lots of very hot sex, both temptation and actual performance. Jane Bowers

Love a good historical romance?
Post a comment to be entered in a chance to win a copy of this book!
Open to U.S. mailing addresses only.
at August 24, 2019

It's been several years since I've read Lorraine Heath's books. This one sounds like a good one to get back in the groove of her outstanding writing. Thanks for the giveaway.

I too have not read Lorraine's books in quite awhile. Thanks for the chance.