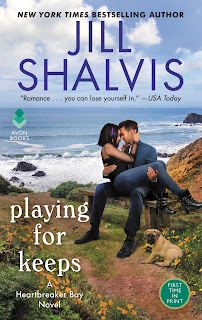 Sadie Lane has a reputation of being a bit of a badass, something she prefers as it keeps the “good men” away from her. After a bad experience three years ago with another man, she isn’t looking to hook up with anyone anytime soon. Sadie is aware of Caleb Parker, a guy she has run into at the nearby gym and one she has nicknamed “Suits” because of what he’s always wearing. One night as she’s getting off work, she notices Caleb walking by until he suddenly stops and is peering at something.  Sadie is curious about what he’s looking at and goes to find out. It’s a puppy. Before they both realize it, they’ve adopted a dog together and are haggling over visitation rights. Will this “connection” lead to something more between them?

In the latest Heartbreaker Bay novel by Jill Shalvis, PLAYING FOR KEEPS, readers get to see the newest couple hook up, Sadie and Caleb. They are both aware of each other due to their mutual friends but had never really interacted. That is, until the night the puppy is found. Caleb grew up believing he was allergic to dogs, but after being around the dog they name Lollipop, he finds out he’s not having to reach for his EpiPen. Both he and Sadie fall in love with the dog and both want her. So, they decide on visitation, which leads to more contact with each other than they ever have had before. An attraction quickly develops, yet Sadie continues to push him away. After her bad experience, it’s left her not wanting to trust getting involved with a man again.

Caleb has three sisters who are overprotective of him because he is a wealthy inventor and he’s their little brother. They even check out the ladies that he dates. Soon they are curious about what their brother is up to because he is being secretive about who he is seeing. He claims it is nothing but they suspect it isn’t. Will they start investigating Sadie once they find out her name? Sadie’s past isn’t pretty and she doesn’t talk about it with most people. If something is found, will it be used against her to force her to stop seeing Caleb?

In PLAYING FOR KEEPS, it’s a slow building romance between Caleb and Sadie. One can’t blame her for wanting to go slow because her last romance showed her to not trust very many men. Could Caleb turn out like that? Caleb might be rich, but around her, he acts like an average man. Well, not too average because he is as hot as Adonis and sexy as they come. It’s the dog that binds them…but it’s their attraction that keeps the fire burning hot between them.

As with most of Ms. Shalvis’s Heartbreaker Bay books, PLAYING FOR KEEPS can easily be read as a standalone despite characters from other books popping in and out. PLAYING FOR KEEPS is funny, sexy and totally fun to read and one of the big reasons why I’ve awarded it A Perfect 10. Don’t miss this enjoyable tale.

If you’re planning on falling in love…When it comes to the confident, charismatic Caleb Parker, Sadie Lane feels the spark—the kind that comes from rubbing each other the wrong way. She’s a tattoo artist, he’s a straight-laced mogul. But after they accidentally co-rescue an abandoned dog from a storm, Sadie sees a vulnerable side to the seemingly invincible hottie.
you’d better be sure…Caleb doesn’t do emotions. Growing up the underdog, he’s learned the hard way to build up an impenetrable wall. Perfect for business. Disastrous for relationships. He’s never worried about it before—not until he finally gets behind Sadie’s armor and begins to fall.
… someone is there to catch you.
Both guarded and vulnerable, Sadie and Caleb are complete opposites. Or are they? Shocked at their undeniable connection, can they ever admit to wanting more? That all depends on what they’re each willing to risk.