Promo: ONE NIGHT WITH THE MILLIONAIRE by SHANNYN SCHROEDER

Shannyn is an occasional English teacher, who also works as a part-time editor while raising her three kids. Even though she wrote from high school through college (mostly poetry), she’d never considered a career as an author. Writing fell by the wayside as she focused her energy on creating lesson plans and new and fabulous ways to torment her teen students. One group in particular dubbed her “The Torture Master,” a title she carried into motherhood. After the birth of baby number two, Shannyn resigned from teaching and fell in love with reading romance novels. She read so many books so quickly that her husband teased, “If you’re going to read so many damn books, why don’t you just write one?” So she did. That first book is safely buried on her hard drive, but the process set Shannyn on the path to where she is today. The 6-book O’Leary series has wrapped up, as well as 2 Hot & Nerdy new adult trilogies. She’s currently working on her next series. She is recovering from her Diet Coke addiction, fears putting her foot in her mouth on social media, and has a renewed appreciation for the bad girls of the world. 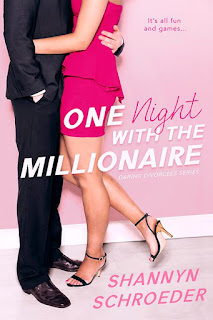 Over-forty, single mom Tess Howland's life is all about caring for other people. Indulging in a one night stand is just what she needs. She doesn't expect to meet anyone she would introduce to her kids, especially not some rich playboy who acts like a big kid himself. Even if he keeps giving her the best sex of her life.
Millionaire Miles Prescott can't get the sexy nurse he met at a fundraising gala out of his head. For the first time ever, he doesn't want a woman with no-strings-attached. He wants everything—even it comes with a ready-made family with a woman in her forties. Suddenly, helping with homework doesn't sound like the worst thing in the world, especially if it means being near Tess.
But what happens when he’s ready to step up and she says no?

Tess’s heart thumped in her chest. She hadn’t expected things to turn so quickly. She’d thought she’d need to finesse the situation with Miles more than that. While she wouldn’t have suggested getting a room here—she’d never expect someone to spend more than her night’s pay on a room—it was certainly convenient. She held on to Miles’s hand as she slipped back into her shoes. Her feet were not happy about being squished again, but she mentally told them they’d be free in one short elevator ride.

Miles continued to hold her hand as they walked to the elevator. When they stepped inside and the doors closed, he said, “You’re sure you’re okay with coming to my room? I’d like to get to know you better. No expectations.”

“What if I have expectations?” she asked, trailing a finger down the front of his shirt.

Pleasure zipped through her as she watched his throat work at her suggestion. She withheld a laugh. Surely he’d been with women who asked for what they wanted.

“I’ve never done this with a man I’ve met at the gala. And here’s the thing, Miles. I don’t get to go out and have fun all that often. I really, really want to have a good time tonight. Think you can help me?”

The elevator finally dinged, and she stepped out without waiting for an answer. When she turned, she noticed they were at the top floor.

“Mine’s this one,” he said, leading her to the door on the left.

There were only two rooms on this floor, which meant it wasn’t a room, but a suite—and not a simple living-room-kitchen combo. This was like an apartment. Holy crap. Forget what she’d thought about losing a night’s pay for a room. This was a paycheck’s worth of suite. He opened the door and held it for her to enter.

As he hung up his jacket, Tess sent a quick text to Nina letting her know where she was and who she was with.

“Problem?” he asked as he came up behind her.

“Not at all. Letting a friend know where I am.” She tucked her phone away again and turned.
“I’ve been waiting for this moment all night,” he whispered and laid his hands on her hips.

That was all the warning she got before his mouth descended on hers. For as taken aback as he’d seemed in the elevator, he was completely sure of himself now. He kissed like a man confident he’d have her naked soon enough.

And she sure as hell wasn’t complaining.

His beard tickled her lips as he moved, sending licks of pleasure through her body. It had been much too long since she’d done this. Miles moved his hands over her, palming her ass and bringing her flush against his body with his hard-on pressing against her belly. A moan slipped past her lips and into his mouth.

He pulled away and stared into her eyes. “Having fun yet?”

“That was a pretty good beginning, and if it’s a preview of what’s to come, I’m on board.”

“I promised you a drink and a view.”

Seriously? He wants to stop for a drink now? Her face must’ve revealed her thoughts.

He smiled and patted her ass. “The room’s mine. For the entire night. I don’t have anywhere else to be. Do you?”

She shook her head, not wanting to admit that her real life was waiting for her a few miles away.