Promo Interview with COLLEEN S. MYERS about her story in WINGS OF THE WICKED

Well, my new release is a box set with 24 other authors and deals with angels and demons and anything that can fly. It is PNR/UF and quite nifty if I do say so myself.

2.  Can you tell us a little about your favourite scene in the story?

I love the sex scene in the second chapter. It shows the intimacy between the main characters.

I would hate to lead. Too much responsibility.

I have a ton of friends but it was after reading an ‘unnamed’ author whose ending I HATED that inspired me to write a better one.

My family finds it funny. My co-workers see notes I do in the medical field which are cut and dried and wonder what parallel dimension sprang up.

I am a doctor and love taking care of people.

I am all over social media but FB is my jam. https://www.facebook.com/colleensmyers. 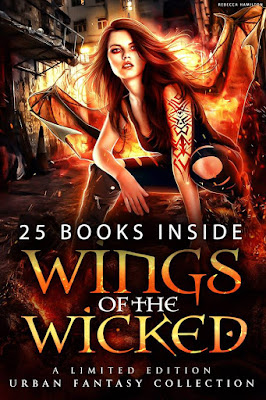 Seri Therotian lost everything to the E’mani. Her brother, her betrothed, her place among her people. But it turns out there is even more to lose including her life, her father, her people unless she is willing to lead the broken race that had forsaken her to victory.
Buy Links:
Universal Link: books2read.com/47ZQDN
#iBooks: https://itunes.apple.com/us/book/id1410452943
#Kobo: https://www.kobo.com/us/en/ebook/wings-of-the-wicked-1
#Nook: https://bit.ly/2NPOKEL
#Amazon: https://tinyurl.com/wingswicked

Excerpt:
Seri's grip on the sheer mountainside above the wind-swept canyon slipped. But her right claw managed to break the surface of the rock and halt her fall.
Thank goodness for sharp nails.
She scrambled for purchase until she got a more solid hold. Her fingers ached but she maintained her grasp. She had no choice. The pale E'mani clones in their dark gray jumpsuits were patrolling the path beneath her; at least four of them. She couldn't take that many, even with her father's help. They had weapons and shields. She had a wooden bow. Even with her magic, if it affected them, that was not much of a match.
She could fly away, but that did not seem like the smartest play either. They might notice a flying fluffy pink girl. She did kind of stand out, even among her own people. Most of whom were grey or brown like her father.
Speaking of her father, she turned to look at Jax hanging on a nearby rock face, his rust colored wings pulled close to his body. He blended with the surface of the mountain on the windswept peak. She on the other hand with her bright red feathers and orange underbelly was screwed. If the clones’ gazes rose, they'd spot her.
This sucked.
She shifted her grip to hang from one hand to the other and flexed her fingers, then repeated the gesture on the other side.
Jax whistled at her in warning and she glared in return.
Yes, she was moving, but that kept her from falling.
She wasn't as used to hanging as enemies paced below her. She was only twenty after all, barely an adult by Avaresh standards and much less battle-forged than him. What did he expect?
Her mouth twisted. Wait, what was she thinking? Her father expected everything of her, she was after all a Therotian. How could she forget. She had a destiny. What a load of-.
Her clawed fingers dug into the rock causing dirt to rain down in a small waterfall onto the E'mani's heads.
Shoot.
She didn’t mean to do that.
She shared a startled glance with Jax who swore under his breath.
He pushed off from the wall as the clones gazed straight up at them and fanned his wings to make himself a bigger target. But he was dark to her light. In the dusky sky, she stood out against the horizon.
They raised their weapons.

Colleen plays many roles. Not only is she a veteran, a mother, and a practicing physician, but she is a writer of science fiction and contemporary romances. Colleen's dreams include surviving her son's teenage years, exploring every continent on this planet, except Antarctica, cause that's way too cold, and winning the Nobel peace prize. Dream BIG! Currently, she is working on Distant Memory, the third in her SciFi Romance series. In the meantime, look for her at https://www.colleensmyers.com