Thank you for joining the Review & Excerpt tour for QUICK FALL by Michelle Dayton! We can’t wait for you to read this spicy, sweet, ‘opposites attract’ romance. While you’re here, make sure to snag Book 1 of the Tracy Brothers series, FAST RIDE, while it’s on sale and enter to win a $25 gift card! 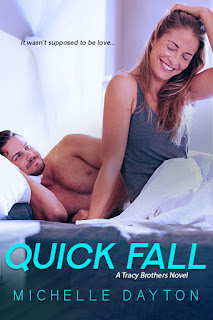 Justin Tracy, the perennial life of the party, is used to being teased by his friends about his success with the ladies.  Not that he’ll ever get serious with one.  Why should he?  His life is absolutely perfect the way it is. But at his brother’s bachelor party, a drunken bet about his womanizing skill gets a little out of control. Before he knows it, his friends have invited his new tenant – a woman he’s never even met – to go to his brother’s wedding with him.

Single mom Maddy Trainor has just moved back to Chicago, ready to reclaim her life and conquer the city.  Maddy’s determined to get her new business off the ground and build a happy home for her son, Teddy.   She didn’t expect a gorgeous landlord, but ogling Justin Tracy is definitely a bonus to her new apartment.

Justin intends to apologize to Maddy for the out-of-the-blue wedding invitation and get gone, but his new neighbor turns out to be funny, whip-smart, and sexy as hell.  Why not take her to the wedding for real?  Just as friends, of course.  To Maddy, the wedding – one night of champagne and dancing with a self-admitted Peter Pan – sounds like amazing no-strings fun.  But the sparks that blaze between the two of them can’t be contained to one night.  And two people who think they have life figured out are about to realize they know nothing about love … 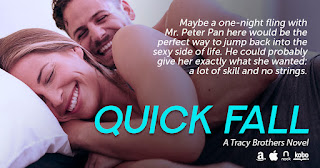 Quick Ride Excerpt
Copyright © 2018 Michelle Dayton
Ding!
Justin caught her hand and pulled her out of the elevator before the doors even had a chance to fully open. “I’m all the way at the end of the hall.”
He was walking too fast for her sore feet; she tripped in her heels. “Wait. Slow down. My feet. Blisters.”
He assessed the complicated gold sandals. “How long does it take to get those off?”
Given the tiny buckle on the ankle strap … with the way her hands were shaking… She sighed. “Two minutes.”
He grinned, mischief sparking in his eyes. “That’s two minutes too long.” Without another word, he lunged forward and threw her over his shoulder in a fireman’s hold.
Maddy shrieked. She’d never been picked up literally by a man before. Upside down, she felt both ridiculous and ridiculously feminine. Uncontrolled laugher—her noisy, high-pitched kind—bubbled out of her mouth. She wouldn’t have thought she could move from unspeakable arousal to hysterical laughter in the space of five seconds, but apparently that’s what Justin did to her.
“Almost there,” he called.
Another thirty seconds and he carefully set her down. She clung to his shoulders until she stopped quivering. Eyes sparkling, Justin inserted the key card into the lock. “After you.”
“Oh,” she breathed. The room was so pretty. Dark wood furniture, a crisp, white duvet on the bed, and an incredible view of Michigan Avenue.
“The hotel sent up a bottle of champagne as a thank you,” Justin said. “Can I pour you a glass?”
“Please.” She’d stopped drinking at the wedding once the dancing had started. Since that was more than three hours ago, she was stone-cold sober now. And since the laughter had subsided and the fact that she was in a hotel room with a man was sinking in, a glass of liquid courage would be very welcome indeed.
Although ... she wasn’t nervous, actually. There was nothing to be nervous about. She was a grown woman whose child was perfectly safe. For once, her legs were shaved and her bikini area was waxed. She was with a no-strings-attached man, but one who was genuinely kind and committed to his family. Someone funny. Someone trustworthy.
Justin handed her a glass of champagne and finished removing his bow tie.
Someone unbelievably gorgeous. Someone who wanted her badly, if his hungry expression was anything to go by.
She set her champagne glass on the nightstand and slowly turned. “Unzip me?” 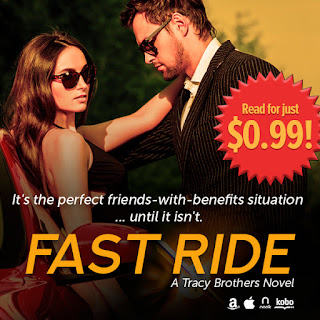