Get Your First Look at FEELS LIKE FALLING by Elle Keating!

Here’s your FIRST LOOK at FEELS LIKE FALLING by Elle Keating! Join us as we get our first peek at this dark and emotional romance. Check out the excerpt and enter to win a bundle of books from the Dangerous Love series! 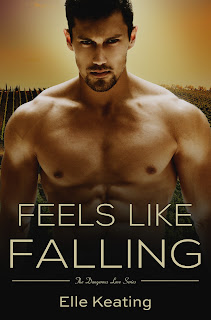 “Did I do something wrong?”
Luke didn’t turn and look at her. He just continued to poke that fire when he said, “No.”
“Are you angry that I ruined your plans with Gabe last night?” It was a lame question. But really, Peyton didn’t know what else she could have done wrong, so whatever…as long as she kept him talking.
“No.”
No. That was all she was entitled to. His one-word answers drove her crazy, especially since he didn’t seem to have any problem spending over ten minutes alone with Tasha talking or…maybe he didn’t spend that time engaging in conversation because maybe they were too busy…
“Did you fuck Tasha?”
He dropped the poker, sending it crashing to the floor. He picked it up, propped it against the brick fireplace and faced her. “No.”
“But she asked you to…to fuck her. Didn’t she?”
“Yes.”
Peyton should have been happy and ridden out that wave of relief, but she wasn’t. His admission that he had just shot down Tasha, one of the sexiest supermodels in the world, only brought on more questions. Questions she really had no business asking. But what did she really have to lose? He had already seen her at her worst. Covered in sand and puke, she imagined that she had looked like a real keeper. So she fired away.
“Are you married?”
He took two steps toward her. “No.”
“Have a girlfriend?” Her voice wavered a bit. She had been more confident when he had been across the room poking the damn fire, but now he was drifting toward her, causing her to lose her nerve.
Three more steps. “No.”
“Oh.” That was all she could get out. She had done a lot of embarrassing things in her life, like when she had taken a header off the catwalk at a major show, or when she had a serious wardrobe malfunction and unintentionally flashed hundreds of people her ass. And then there were those photos of her that were posted on social media before she had gotten her shit together. But this moment right here. This claimed the number one spot. “I get it. You’re just not interested…in me.”
Or maybe he senses what you are…
He made the distance between them disappear with two strides. His hands gripped her waist as he pinned her against the wall of windows at her back. “Do you honestly believe that I’m not attracted to you?”
His breathing was labored like hers and she was fighting to regain her composure. Trapped in his arms, his heated eyes searching hers, she fumbled for words. “I…I don’t know what you’re thinking. What you want.”
He swallowed hard and that vein near his temple pumped ferociously. His right hand tightened around her waist and his left cupped her cheek. “What do you want from me, Peyton?” he asked, his voice strained. He sounded as if he was in pain. And that’s when she felt something rock-hard press against her core. She didn’t need to look down or see the outline of his bulge to know that he was huge. She could feel it…every fucking where. “Say it,” he demanded.
“I want you to kiss me…please.” 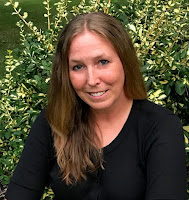