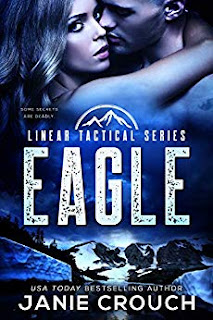 "Princess, look at me."
One of her eyes cracked open.
"You've done your part. Now it's time to let someone else take over this fight."--Finn Bollinger. Military codename: EAGLE.
A single dad, a warrior, a hero.

And the only person who can save Charlotte Devereux. The woman who once shattered his life.When former Special Forces soldier Finn Bollinger is asked to help with an undercover mission, he's up for the task. His job teaching survival skills to civilians at Linear Tactical keeps him sharp, and he can still handle himself in the field. But the Army damn well didn't teach Finn how to handle Charlotte Devereux. She's back and she's all sorts of bad news. Charlotte can't change the past. Can't change the choices she made or the fact that they cost her everything. All she can do is endure the fallout. Even if that means putting her future in the hands of Finn, the man who has every right to want to destroy her.And can in so many more ways than he thinks.When Finn's undercover mission goes impossibly wrong, he'll have to depend on Charlotte's strength in order to survive. But everyone has a breaking point.He's fighting for what's right.
She's fighting just to survive... ******EAGLE is a stand-alone steamy romantic suspense, set in the LINEAR TACTICAL series. Meet the former military men of Linear Tactical, and the women who bring them to their knees: The strongest fall the hardest. A "less-steamy" version of this book (same great story but with toned down language and sensual scenes) is available on Janie's website: janiecrouch ~ If you like the heat level of Janie's Harlequin Intrigue books, you'll love the "less-steamy" version of the Linear Tactical series!


Purchase a copy at Amazon.

Learn more about EAGLE at the author's website: http://www.janiecrouch.com/eagle

USA TODAY bestselling author Janie Crouch writes what she loves to read: passionate romantic suspense.  She is a winner and/or finalist of multiple romance literary awards including the Golden Quill Award for Best Romantic Suspense, the National Reader’s Choice Award, and the coveted RITA© Award by the Romance Writers of America.
at October 29, 2018