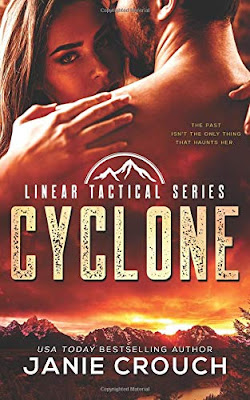 CYCLONE - Janie CrouchLinear Tactical, Book 1Calamity Jane Publishing
ISBN: 1230002207834
ASIN: B07FH6Y51Z
October 2018
Romantic Suspense
Present Day - Oak Creek, Wyoming
Zac Mackay doesn’t remember what happened during a drunken binge six years ago, but he’s horrified to see that Annie is afraid of him now when they’ve met up for the first time since then. He doesn’t know what he did, but it’s clear he hurt her, even though she won’t say how. He’s determined to find out what happened, and how he can make it up to her.
Annie Nichols Griffin is back in Oak Creek, Wyoming after a very rough six years. She’s gotten married, divorced, had to file bankruptcy, and lost the woman who was her only real family for years. She never wanted to come back here, not after that night with Zac, but she has nowhere else to go. She thought she could stay off his radar, but life keeps throwing them together. And now that there’s a rapist on the loose, Zac definitely doesn’t want to let Annie out of his sight.

CYCLONE plays out with a good balance between romance and suspense. The thrill keeps you reading, and the love story gives readers that warm feeling inside. Zac and Annie have a unique history, and seeing these two try to find a happy ending after such a rough road makes this well worth a read.
The characters are well fleshed out, and Zac’s coworkers at Linear Tactical, the training and security firm owned and run by Zac and his friends, will have readers eager for them to get their own stories. The author deserves kudos for distinct character growth and development, as well as a villain that will keep readers guessing until the very end.
CYCLONE works perfectly as a stand-alone, but readers will be excited to get stories for the other employees of Linear Tactical, so keep an eye out for EAGLE, coming November 2018.

He'd protect her from any threat...

But what if the biggest threat is him?
Doctor Anne Nichols is back in Oak Creek, Wyoming, only because she has no other options. Here, she was always the shy, stuttering girl, invisible to everyone. Except Zac Mackay. The very reason she left in the first place.Zac's years in Special Forces taught him survival skills, and he's created a company--Linear Tactical--to teach those skills to others, so they never have to live in fear.Then why is Annie, the last person he'd ever want to hurt, afraid of him? Zac's determined to wipe the fear from the eyes of the woman who has never been far from his mind. And fix the mistakes--his mistakes--that put that look there in the first place. But a predator has set his sights on Annie. And now survival skills will become much more than lessons...