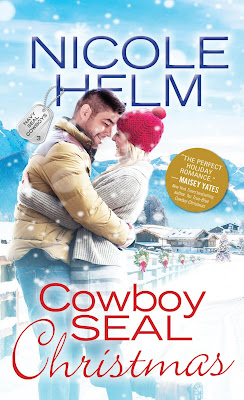 Three former Navy SEALs
Injured in the line of duty
Desperate for a new beginning…
Searching for a place to call their own.

Single mom and Revival Ranch’s on-site therapist Monica Finley has dedicated her life to helping brave servicemen and women, but former Navy SEAL Gabe Cortez is the one man whose shell she just can’t crack. Yet with the holidays fast approaching, she may finally have a plan. In a bid to get Gabe to open up, she’ll ask for as much help as possible—cutting down the Christmas tree, stringing lights, the whole nine yards.

Who could possibly be a Grinch with so much holiday cheer in the air?

Gabe has always hated Christmas—the holiday never fails to remind him just how alone he truly is. But the more time he spends with Monica and her young son, the more he finds himself drawn to their cozy little family…and the more he begins to realize his long-suppressed Christmas dreams may finally be coming true.


And then they were all heading for the stairs—Monica and Colin bickering over bedtimes, Alex and Becca sleepily arm in arm, and Gabe was left alone, seemingly forgotten, just him and the dogs.
He got up, ready to head out and ignore any of the idiotic disappointment in his chest. But bottles and glasses littered the coffee table, along with a few paper plates. He’d just grab those and throw them away, cutting down on some of the work Monica had to do. Quickly, before she came back down.
He collected the plates and a few bottles, disposing of them in the appropriate receptacles in the kitchen. Then he figured he could unload the dishwasher real quick, since he’d lived here before the bunkhouse had been ready and he knew where everything went.
Once he’d done that and added another load, he went back to the living room. He’d just collect the remainder of the glasses and then Monica wouldn’t have to do anything.
“Oh.”
Gabe glanced toward the sound. Monica stood at the bottom of the stairs, and he couldn’t read her expression or begin to understand what that oh had meant.
“Got most of it done. Just these left.” He ignored the glasses he’d been going for and moved toward the door. “I was getting ready to head out though.”
Monica shook her head, grabbing her glass of wine and refilling it with the last of the bottle. “Stay. Have a drink with me.”
Gabe watched her suspiciously. “Why?”
She plopped herself onto the couch, staring at the fire instead of back at him. “Because otherwise I’m going to sit here and wallow about the passage of time. I’d rather bicker with you.”
He’d regret it—he knew he’d regret it—and yet he couldn’t seem to resist. Much as he hated to admit it, he wasn’t tired enough to sleep instead of wallow.
He was at least smart enough to take a seat in the armchair instead of next to her on the couch. And he was not about to drink any more.
“So, why aren’t you with your family?” she asked with no preamble.
Family. Funny word, that. Still, he didn’t wince. He knew he’d be asked. He had his rote answers prepared. “They live all the way on the other side of the country.”
“I do believe they have these things called airplanes.”
“Really? Haven’t heard of them.”
Her mouth curved, and she looked different in the flickering firelight. Fragile almost, where usually she looked impossibly sturdy and strong.
“Why aren’t you with yours?”
“My parents are on a cruise celebrating their thirty-fifth wedding anniversary.” She smiled fondly, but it died quickly. “Colin’s other grandparents don’t much care for us. Well, that isn’t fair. We remind them of Dex, and they…well, I suppose they haven’t fully dealt with their grief. I’m not sure I can blame them. I’m not sure all the therapist training in the world would help me if I ever lost…” She shook her head. “See? Morbid wallowing. I don’t want it. Say something obnoxious.”
“Marines are pussies.”
She barked out a laugh, then covered her mouth, presumably since there were people sleeping upstairs.
She had a good laugh. Loud and uninhibited. Hell, he needed a beer.
“My dad is not a pussy,” she said, sounding far more amused than offended.
Gabe shrugged. “I’m sure he doesn’t think so.”
Monica shook her head. She’d worn her hair down today, which she rarely did. In the firelight, it was tinged red, and seriously, he had to get his ass out of this chair and get a beer.
But he sat. And he watched her.
She cleared her throat, holding the wineglass with both hands, staring hard at the fire in the fireplace. The dogs had disappeared at some point when he’d been cleaning, so it really was just him and Monica.
“I know I don’t owe you any explanation about how I treat my son, but…well, you’re very good with him. He looks up to you. All three of you really, and it’s good for him to have you three as influences in his life. But he seems to be particularly connected to you.”
Everything in him tensed, chilled. That careful tone of voice, the way she wouldn’t meet his gaze. He knew what came next. He’d been here before, hadn’t he? “And you want me to stay away?”
“No, not at all.” She frowned, her gaze all shock and confusion as it met his. “Why would you think that?”
Gabe looked down at his hands. He hadn’t realized he’d gripped them both into tight fists, but there they were—white knuckled and clenched. He tried to come up with some explanation, but in the end, his scratchy voice just managed some lame excuse. “I’m not his dad.”
“No, but he needs people of all stripes in his life, people who’ll teach him different things and offer him different opportunities. He needs people to look up to because he feels a connection. I’ll always be a shade too overprotective. I’ve worked through some of it, but…Dex died…”
He unclenched his fists and placed his hands on the arms of the chair, ready to push out of it. “You don’t have to explain it to me.”
“But I want to. I want you to understand. You’re a part of Colin’s life.” She said it so seriously, so baldly. None of her usual therapist carefulness in picking the words. He knew better than to look, but he couldn’t seem to help himself.
She was staring at him, emotion written all over her face. An earnestness, a hope, and, underneath all that, love—love for her son.
Gabe was somehow rendered speechless by that, and he was never, ever speechless. 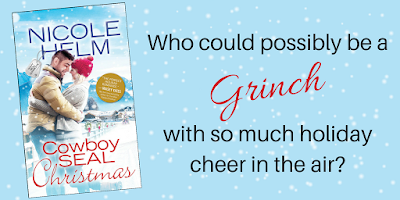 Adding to my wishlist.