Book Giveaway: THE DUKE BUYS A BRIDE by SOPHIE JORDAN 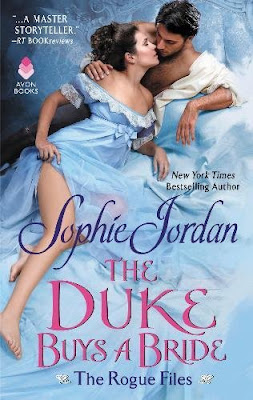 A bride wasn’t in his plans . . .
The last thing Marcus, the Duke of Autenberry, expects to see after sleeping off a night’s drunken shenanigans is a woman being auctioned in the village square. Before he can think about the ramifications, he buys her, thinking he’s winning the girl her freedom. Instead, he discovers he’s bought a wife.

A duke wasn’t in hers . . .
Alyse Bell is almost rid of the shackles that bound her in a name-only marriage, but the day her friend promised to purchase her in a wife auction, he vanishes, leaving her to face a mob of unsavory bachelors intent on owning her body and soul. But the appearance of a wicked, wealthy stranger changes her path forever.

The road to ruin . . .
Marcus doesn’t know what to do with the impertinent chit who clearly isn’t duchess material! Insisting their marriage isn’t legitimate, they leave for his estate in Scotland, hoping to devise a plan to get rid of each other. However, on a journey fraught with misadventure, their attraction grows and Marcus realizes he’ll do anything to keep this fiery woman for his own.

Sophie Jordan grew up on a pecan farm in the Texas hill country, where she wove fantasies of dragons, warriors, and princesses. A former high school English teacher, she's also the New York Times bestselling author of Avon historical romances and the Firelight series. She now lives in Houston with her family. When she's not writing, she spends her time overloading on caffeine (lattes and Diet cherry Coke preferred), talking plotlines with anyone who will listen (including her kids), and cramming her DVR with true-crime and reality-TV shows.

Would love to win. Sounds like a good read.

I would love to win and read this one!! I love her books.

I have not read her before. Sounds good.

Ooh, this sounds like a fun premise! Thanks for the chance!