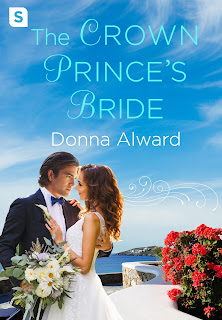 THE CROWN PRINCE’S BRIDE – Donna AlwardThe Prince Duology, Book 2Swerve (eBook only)ASIN: B0769Z8745January 2018Contemporary RomanceMarazur – Present DayStephani Savalas has been Crown Prince Raoul’s loyal and efficient assistant for ten years, and has had a secret crush on him despite his being married to her cousin. But now Raoul is a widower with two young children, and Stephani feels it’s time for her to move on before he finds himself a new bride. She hasn’t told him yet because she’s not sure how he’ll take the news, plus she’s in the midst of planning the wedding ceremony of Raoul’s younger brother Diego’s marriage to a commoner.Raoul sees how busy Stephani has been working, and he wants to reward her with some time off—together. While he does still mourn the wife he lost in a car accident months ago, he is now aware of one thing: he’s attracted to Stephani. However, he’s not looking for a new bride at this time, and she makes it clear she doesn’t want to jeopardize their working and familial relationship because of the children. But neither can resist the sizzling chemistry that has them soon sharing kisses. Will a business trip to the French Riviera allow them to explore their attraction for each other? Will the tiny country of Marazur soon see another commoner walk down the aisle as the bride of a prince?Readers first met Raoul and Stephani in Diego and Rose’s tale, THE PRINCE AND THE NANNY, out now, where Raoul had recently lost his wife and needed a nanny. Stephani has stood by Raoul’s side faithfully, though she has hidden her secret attraction to him. She has no desire to be the future queen, but is well aware that he’ll soon be ready to date—and marry—again. She has already started looking for a new job, but isn’t sure how to tell him. As the wedding nears, suddenly Raoul is hovering over Stephani, making sure she eats and rests, and promises her some pampering as a way to say thanks for all the hard work. But there is an awareness between them that leads to a heated kiss. The last thing either wants is a scandal, which means no secret trysts behind the palace walls. But will a business trip to France mean a chance to act upon their attraction? And if it happens, will it change their relationship?THE CROWN PRINCE’S BRIDE is a tale of second chances. For Stephani, she has kept secret her feelings for Raoul all these years. She would never have dishonored her cousin. For Raoul, he wondered if he would ever find love again and now he realizes he might be able to with the woman right under his nose. While both THE CROWN PRINCE’S BRIDE and THE PRINCE AND THE NANNY can be read as standalones, you are missing out if you don’t read both. A tale that is both sweet and sensuous, grab a copy of THE CROWN PRINCE’s BRIDE and be swept up in the royal romance of Stephani and Raoul.Patti Fischer

Q: What books are on your nightstand?
A: The Little Paris Bookshop by Nina George, Witches of New York by Ami McKay, and books I’m judging for the RITA on my kindle.

Q: What author would you totally fan?
A: LaVyrle Spencer. But you know, I actually totally fangirled over Julianne MacLean, as I discovered her historicals maybe…10 years ago? And I glommed. I glommed hard. The first time we met we were doing a signing together. I’m lucky to say we’re now friends. J

Q: What makes you cringe?
A: Videos that have anything to do with losing fingernails/toenails and/or teeth. *shudders*

Q: Is there a word you love to use?
A: Clearly. Though I find I have a different word in each book that needs pruning in the end.

Q: Do you have any pets?
A: Yes! Three. Dreamer is our elderly Nova Scotia Duck Tolling Retriever, Boo is our very large, very zen cat, and Romeo is our black-and-white cat who is very aptly named. He kisses up to everyone.

Q: This book is super timely with the Prince Harry and Meghan Markle engagement. Why do you think we are so fascinated by royalty? What fascinates you about it?
A: What I ADORE about royalty books (and our fascination with the current monarchy) is the whole “it can happen to you” paired with all the glamour. With Will and Harry in particular, we’ve seen them as real people. Young boys who’d lost their mum and then young men finding their way and falling in love and growing into their responsibilities. The heroines, too, aren’t princesses. Meghan is a celebrity in her own right, but adjusting to life in the British monarchy is very different. I had so much fun writing this duet because the characters were so real to me – not just figureheads. At the same time, I had the opportunity to write in flowers, jewels, balls, trips to the French Riviera…what’s not to love?

Q: What are the best and worst parts about Raoul’s personality?
A: His commitment to his duty…and it’s a double-edged sword. It makes him perfect for leading the principality, because he is about serving the people and his country. But it also gets in the way of him having his own life, and happiness he deserves. He also has a very stiff upper lip, so he doesn’t always share his feelings, and those who care about him have to know him very well to understand him. The great thing is, when he loves someone, there’s nothing he wouldn’t do for them.

Q: Any more plans for more royalty romances in the works?
A: Never say never.

Q: What was your favorite fairy tale?
A: Probably Beauty and the Beast, because she really rescues him, rather than the other way around. And she reads BOOKS. J

Summary:
A Crown Prince gets a second chance at love with the woman who’s always been there - in the next book in the prince duology from Donna Alward!The Crown Prince of Marazur is suffering from a broken heart. After losing his wife and future queen, he knows he’ll never find love again with a partner as wonderful as her. He’s thrown himself into his duties and is trying to be a better father to his two children, but he’s lonely. Even though falling in love seems impossible, so does spending the rest of his life alone. Stephani has been Raoul’s assistant for years. Smart, loyal, and discreet, Stephani is fantastic at her job. Except for the fact that she’s been in love with her boss since her first week of employment, not that she would ever act on it. Besides, Raoul is first in line to the throne and she’s his assistant. If Raoul ever marries again, it’ll be with someone who can be a future queen. Not someone like Stephani. When Raoul’s date for a state dinner is unable to attend, he invites Stephani. She’s well-versed on the issues and castle protocol, and Raoul’s always been comfortable with her. But when Stephani arrives, Raoul hardly recognizes her. Is this stunning woman the same one who’s run his office for years?The Crown Prince’s Bride is the ultimate fairytale for readers looking for Cinderella to get her prince—and be able to keep him past midnight.

Author Bio:
A busy wife and mother of three (two daughters plus the family dog), Donna Alward believes hers is the best job in the world: a combination of stay-at-home mom and romance novelist. Donna loves being back on the East Coast of Canada after nearly twelve years in Alberta where her romance career began, writing about cowboys and the west. She is the author of Somebody Like You, Somebody's Baby, and Someone to Love.