Promo: UNDER A SCOTTISH SKY by PAMELA Q. FERNANDES 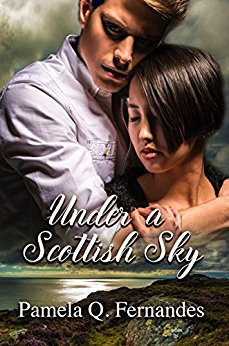 About the author:
Michelle Reyes is a strong, guilt-ridden woman. Traveling as a nurse from her home in Manila to Scotland to see the stars, she meets Adrian, the son of her patient. She sees Adrian as arrogant, unforgiving and cruel. But is Adrian more than he appears to be?
Michelle's website: https://www.pamelaqfernandes.com/
Excerpt:

"I love Scotland!” Michelle told her sister over the phone, taking her luggage from the conveyor belt at the Glasgow airport.
“Don’t get too excited,” her sister said. “It may seem magical and all, but it’s nothing but farmland. Call me as soon as you get to the residence.”
Michelle rolled her eyes. Leave it to her sister to look at the cloudy side of things. She had a habit of raining down on Michelle’s joys. Just because her sister managed to get a well-paying job in the US, she’d thought it qualified her to give Michelle advice. Never mind that her sister was seven years older than her. Age was just a number according to Michelle, it didn’t really qualify sense. Michelle swung her rucksack on her back and walked towards the help desk.
“Hullo Miss, ken I help you?” the lady at the desk said. Michelle smiled, she was really in Scotland.
“I need to travel to Oban, how do I get the train there?”
“Lass, you’ll have to get the McGill’s bus service to Paisley Gilmour Street. Then take the train to Glasgow Queen Street.”
The woman tapped her pencil on a map and went on, “Trains from there to Oban are pretty regular.”
“Thank you, Ma’am,” Michelle replied, quite upbeat. She was a traveler at heart after all. A big city girl from Manila. She knew how to change trains, buses, jipneys, tricycles and even motorcycle rides within the crowded capital. How hard could it be? Michelle soon found out. The bus had been pre-booked by airport travelers and couldn’t seat her, so she waited for another. It didn’t dampen her spirits. She tried to call her employer to inform him of the delay, but his phone had been switched off. How rude! When he knew she’d be arriving today.
Still, she was here and she couldn’t ignore the beauty of the city, so different from where she’d just come from. The air was fresh and clean, slightly heavy and damp. But clean, unlike the smog clogging the Manila skies. The roads were wide and the people, tall and fair. Michelle knew she’d stand out as a Filipino. Her pixie cut and sharp Mongoloid eyes were a dead giveaway for an Asian. She just hoped people didn’t assume she was Chinese. Chinese tourists had developed a bad reputation, so she pulled out the cross from under her collar and let it hang out, her sky-blue shirt now horribly crumpled after the twenty-four-hour journey she’d made across the continent. Her jeans and thin socks couldn’t prevent the slight chill she felt in the cold air.