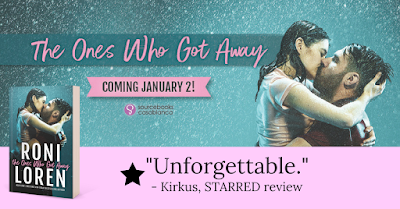 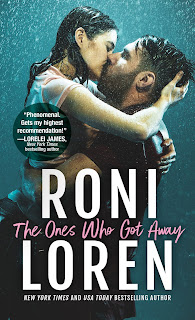 It's been twelve years since tragedy struck the senior class of Long Acre High School. Only a few students survived that fateful night—a group the media dubbed The Ones Who Got Away.

Liv Arias thought she'd never return to Long Acre—until a documentary brings her and the other survivors back home. Suddenly her old flame, Finn Dorsey, is closer than ever, and their attraction is still white-hot. When a searing kiss reignites their passion, Liv realizes this rough-around-the-edges cop might be exactly what she needs…

Liv's words cut off as Finn got closer. The man approaching was nothing like the boy she'd known. The bulky football muscles had streamlined into a harder, leaner package and the look in his deep green eyes held no trace of boyish innocence.

Excerpt:
The boards of the restaurant’s back deck creaked somewhere behind Liv. She didn’t need to turn and look to know it was him. Her senses seemed attuned to his presence. She kept her eyes on the water, letting her greeting drift between them. “Hello, Finn.”
“Liv.”
The quiet tenor of his voice hit her harder than she’d expected, the volume too close to how it used to sound against her ear in those stolen make-out sessions. Funny how even after all the years and the men who’d cruised through her life since, that voice still sounded so bone-deep familiar. She didn’t turn to face him, not trusting her expression to stay neutral. “I guess it turns out I have time for that drink after all.” She lifted her glass. “But I’ll warn you, I’m a few drinks in and all out of energy for polite chitchat.”
“Good. I don’t chitchat.”
He stepped a little closer, his scent drifting her way—some combination of cedar and mint. Like a man who chewed gum while chopping wood. The thought made her want to giggle.
“Are you okay?” he asked.
Liv scrunched her nose. “You mean, am I drunk?”
She wasn’t sure what the answer was on that one. Probably a little. She doubted she could be this close to him without anxiety bubbling up otherwise.
“No. You ran out of the gym today. I mean, are you okay?”
Okay.
Was she? She hated that question. That was the question she’d probably heard most since that night—and then again when her mom passed from cancer two months later. That was what everyone always wanted to know. Are you okay?
But people asked, wanting her to say, Yes, I’m fine. I’m going to pull up my bootstraps and not make you uncomfortable with my messy feelings. No one wanted the real answer. But she got the sense Finn did. After all, he’d probably gotten asked that question just as much as she had. She released a breath. “Today sucked.”
“Yeah.”
She took a sip of her drink, the sweet liquid cool on her dry throat. “Being in the school got to me, but I’m okay now. Just a little panic attack—shitty but brief. Drinks and friends helped distract me.”
She could hear him shift behind her, skin against fabric, maybe tucking his hands in his pockets or crossing his arms. “Distraction’s good.”
She finally stole a glance at him, but he was shrouded in shadows, just a broad-shouldered silhouette. “You could’ve joined us. You didn’t have to eat alone.”
“Y’all looked involved in something,” he said, the gruff drawl in his voice making her think of steamy-windowed moments in the back of his car. She used to tease him that the more turned on he got, the more his country-boy accent showed. “You were reading papers. Seemed kind of intense.”
“Oh, that.” She turned back to the water, her shoulders curving inward and the sexy memories icing over. “We were opening this time capsule thing we did a long time ago. It’s probably good you didn’t come over and hear that part.”
“Time capsule?”
She picked at a splinter in the wood railing. “Just something we did that summer after everything happened—promises we made to the Class of 2005 about our futures. Kincaid decided we should open the letters inside tonight to see what our teenage selves hoped we’d become. I decided we should get drunk after.”
He made a throaty sound—like a laugh that didn’t quite make it out—and moved closer. He settled next to her along the wooden rail, his gaze fixed on the dark water. “Sounds like a solid plan to me.”
“I thought so.” She rattled the ice cubes in her glass and dared a peek at him. But all she got was his familiar profile, the slight bump in his nose from when he’d broken it sophomore year, and the unfamiliar scruff as he took a sip from his drink. It was hard for her not to stare and catalog all the little differences, all the changes time and experience had given him. The harder angles. The dark mess of hair that looked at least two haircuts past neat. Expression that didn’t reveal a thing. He was still Finn somewhere in there, but gone was the boy with the wide smile and the playful attitude. There was a sharpness to him now, jagged edges. Like if she met him in a dark alley, she’d have trouble determining if he was friend or foe.
He lifted his drink in agreement and turned, his green eyes gray in the darkness. “That was my plan, too. Minus the time-capsule part.”
“Ha. Lucky you.” She shifted her stance and accidentally bumped her shoulder against his, sending a tendril of awareness down her arm. She wet her lips, ignoring the shiver. “Now you’ll never know if you lived up to teen Finn’s expectations.”
He was quiet for a moment, and she wondered if he was having the same push and pull inside as she was. On one hand, this felt comfortable. They’d always talked easily with each other. But at the same time, they were strangers now. Strangers who had this big, breathing beast between them.
He took a long swig from his drink. “Teen Finn didn’t have expectations. He just wanted to play football, not work for his dad, and get the hell away from here.”
“Guess you lived up to that last part at least. I was convinced you’d changed your name and moved to a foreign country.”
His jaw flexed. “Something like that.”

THE ONES WHO GOT AWAY – Roni LorenOnes Who Got Away, Book 1Sourcebooks CasablancaISBN: 978-149265140January 2018Contemporary RomanceLong Acre, Texas – Present DayTwelve years ago, tragedy struck the senior class of Long Acre High School when some armed students entered the room where the prom dance was being held and killed several fellow students. Olivia “Liv” Arias was one of the survivors that were nicknamed “the ones who got away.” But the scars run deep and walking into the school years later to be interviewed for a documentary brings back those painful memories. As she walks away after the interview, Liv learns that her ex-boyfriend, Finn Dorsey, is also there. She hasn’t seen him since the tragedy; it’s like he fell off the face of the earth. Talking to him, Liv realizes Finn is different now. He’s harder, darker and quieter. The next morning, they run into each other and chat, during which Finn nearly kills the hotel manager because the man was taking pictures of them. Liv realizes Finn isn’t the boy she once knew.The shooting changed Finn, and now he is part of the FBI’s special forces. His goal all these years has been to find the outfit that supplied the guns to the students that led to the rampage. Finn has just gotten off a big assignment where he was undercover for two years and he barely escaped with his life. Meanwhile, as he mentally recovers, he must not have his picture circulating out there in case the bad guys see them and come after him. Meeting Liv after all these years, he realizes how much he’s still attracted to her, and invites her to spend weekends at the lake front house he’s rented for the summer. Both know where it’s going to lead, but will it just turn out to be a temporary fling?The school tragedy affected many lives and it hangs over Liv and Finn. That night, they were in a closet kissing when the shooting started. Finn heard his date (yes, he came with another girl) scream and he ran to help her. One of the shooters found Liv in the closet and pointed his gun at her, but didn’t shoot her because they were only going to shoot the “happy ones.” As a bit of a freak at school, Liv didn’t fit that profile. As with a lot of tragedies, the ones not killed are left with “survivor’s guilt.”There’s still an attraction simmering between Liv and Finn, and they finally get a chance to rekindle their love in THE ONES WHO GOT AWAY. Looking back at their hopes and dreams, Liv and three female schoolmates realize they haven’t yet achieved their goals. With Finn’s encouragement, Liv gets a chance to work at one of hers, which is photography. As they spend time together, the easy camaraderie they had twelve years ago soon returns and leads to sex. But Finn will be gone by the end of the summer. Will he leave Liv’s heart broken once more?Readers will be pulled into the story about the tragedy and the aftereffects it has on the former students in THE ONES WHO GOT AWAY. But from darkness comes light as Liv and Finn fall in love. They know there’s a lot of baggage between them, some of it shared, but they are determined to heal and move on with their lives. But will it include each other? THE ONES WHO GOT AWAY is the first book in Roni Loren’s Ones Who Got Away series. It’s not clear who will get the next tale as there are three more girlfriends in the little circle of friends.An emotional tale that brings Finn and Liv happiness after a tragedy, be sure to look for THE ONES WHO GOT AWAY and be prepared to not want to put it down.Patti Fischer